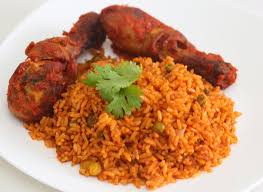 Prince Charles has spoken about the ongoing dispute over whose Jollof rice is best, only to sidestep the issue of revealing his own preference.

Speaking in Nigeria at the end of his West Africa tour, he said:

Quote Message: Having also visited The Gambia and Ghana over the past week, our visit to Nigeria may perhaps provide an invaluable opportunity to compare – if one ever dares do such a thing! – the relative merits of each country’s Jollof rice… however, for fear of sparking a diplomatic incident, I suspect I shall have to let you draw your own conclusions about which country’s Jollof we found to be the most delicious!”

The last high-profile British person to dare to talk about Jollof rice was the chef, Jamie Oliver, who at least seemed to unite West Africans in condemnation of his own recipe.

We suspect that Prince Charles was briefed about the ongoing rivalry over the traditional dish made with rice, tomatoes, and spices because he was so careful not to reveal his favourite.

There has even been a song written by a Ghanaian about how much she can’t stand Nigerian Jollof rice.