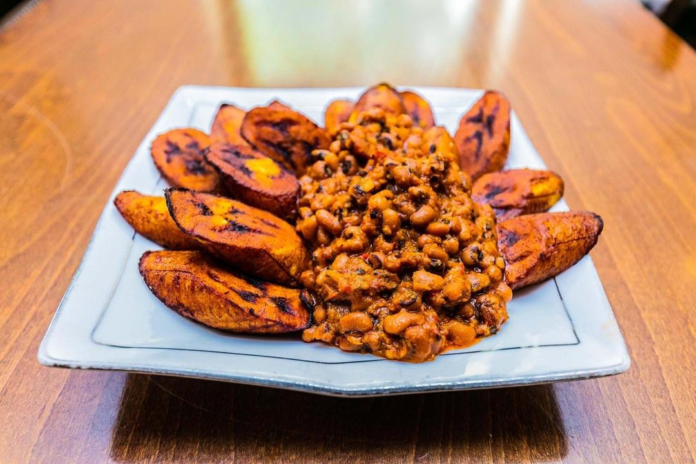 Sellers of gari and beans popularly called ‘gob3’ or ‘Red Red’ in the Ashanti Region, especially in Kumasi, are no more selling the dish at one cedi.

A bowl is now going for one cedi fifty pesewas at the cheapest.

This is because the price of beans has shot up by 100 percent since October and consumers have started feeling the impact.

Godbless Nuamah, 22, loves gari and beans. That is his go to meal every day before the day ends. A day without eating this food means he has to spend more.

“Beans is one of my favourite foods because it’s less expensive as compared to the other foods,” he said.

His daily budget has been affected due to the price increase. As a student, the meal sustains him through the day at a minimal cost but the situation is different now.

“With four cedis I used to get satisfied but now I have to buy more than four cedis or I have to go for a second round to get fully satisfied,” he bemoaned.

Afia Mansah carefully pounds this quantity of beans in a mortar. This activity is to easily separate chaff from the beans properly before she cooks it.

She then pours the beans on a perforated wooden tray, rubs her hands on the beans to get rid of the chaffs.

This is meant for her “gob3” food joint at Ayigya in Kumasi. Though a sack of beans is expensive, Mansah complains “the sack is full of chaffs”.

Just like other “gob3” sellers, she has increased the price of her beans to stay in business.

“I have stopped selling the beans at 1.00 cedis, it’s now 1.50pesewas or 2.00 cedis. Though I have increased the prices I hardly make profits like I used to,” she lamented.

A cup of beans in the Kumasi Central Market was sold at 2.50p between January and September.

“The price of the beans keeps going up, that is why we have increased the prices and our customers complain about the new price,” she noted.

A bag of imported beans from neighbouring French-speaking countries sold between 300 cedis and 400 cedis at the beginning of year, is now sold at 600 cedis.

Alhaji Baba, is an importer of the staple food. He attributes the increase to the CFA and high cost of fertilizer prices.

“We import the beans from most of the French countries, unfortunately the CFA keeps increasing. Most of my colleagues have stopped importing the beans,” he said.

Meanwhile, Baba’s customer, Comfort, says “she is unable to buy beans in large quantities due to the high price coupled with increase in fuel prices.

Well, it is evident that until the Ghana cedi stops depreciating and fuel prices are reduced, food prices will keep going high.