The Premier League fixtures have been announced and the headline news of the opening weekend is that Premier League champions Manchester City will travel to West Ham in what could be Erling Haaland’s debut.

Elsewhere, the other two newly promoted sides Bournemouth and Nottingham Forest will face off against Aston Villa at home and Newcastle United away, respectively.

The big news away from the opening weekend is that, as reports have said, there will be no games between Boxing Day and New Year’s Day because of the World Cup finishing on December 18. Games will be played on December 26 and December 31.

The second weekend of the season has thrown up a headline game with Chelsea facing off against former manager Antonio Conte and Tottenham Hotspur at Stamford Bridge, whilst in the third game of the season, Liverpool will face Man Utd at Old Trafford.

WHEN DOES THE PREMIER LEAGUE START AND FINISH?

The Premier League season begins on Saturday, August 6, but like last season, there will be a Friday night fixture to kickstart the campaign, which will be on August 5.

The Premier League season will finish on Sunday, May 28 2023.

HOW DOES THE WORLD CUP IMPACT THE PREMIER LEAGUE?

The 16th round Premier League matches falls on November 12-13, and there will then be a pause for the World Cup in Qatar.

The first World Cup matches, including England v Iran, are on November 21.

The World Cup final is on Sunday, December 18, with the Premier League resuming eight days later on Boxing Day.

The reigning Premier League Champions will be hoping to continue their dominance in the domestic league. Pep Guardiola will certainly be eyeing October 1 as the date to ensure his hold on the city of Manchester continues, with his side hosting Manchester United under Ten Hag for the very first time. The reverse fixture at Old Trafford will take place on January 14.

Guardiola will also be circling the dates his side takes on Liverpool with the two teams being the top two in the league, and the fixtures could certainly be title deciders. They visit Anfield on October 15 and host Klopp’s men on April 1.

United certainly do not want to be beaten 9-0 on aggregate again by their biggest rivals this year, and with Ten Hag at the helm, the hope for fans is that their club will finally be able to go toe to toe with Liverpool. They host Klopp’s side early on in the season, on August 20, with the reverse fixture being on March 4.

Losing the league by one point is tough. Losing it by one point twice in three years is even worse. Liverpool have pushed Man City all the way these past few years, but only once have they not fallen short, winning their first league title in 30 years during the 2019/20 season.

Besides their fixtures against the Manchester clubs, Liverpool fans will be eyeing the Merseyside Derby fixtures as ones to watch, and with Frank Lampard just barely securing safety at Everton, these fixtures will surely be exciting to watch. The Reds will head to Goodison Park on September 3 before hosting their city rivals on February 11.

Arsenal just missed out on the Champions League last season after failing to pick up crucial points in the run-in. What was worse for fans was the fact that their North London rivals, Spurs, were the ones who pipped them to fourth.

Arsenal’s goal this upcoming season will surely be to get back into the top four, and the club will be eyeing the North London Derby at the Emirates on October 1 as an opportunity to get some revenge for last season’s happenings.

This summer will be the first time Antonio Conte has a full pre-season with Tottenham, having come in last season in November to replace the underwhelming Nuno. The fans will certainly be in full voice when Arsenal come to the Tottenham Stadium on January 14.

Chelsea have certainly had a memorable season after the UK government put sanctions on the previous owner; a factor that Thomas Tuchel said certainly affected results on the pitch. They will hope to put all that behind them as they look to challenge the top two: Manchester City and Liverpool, for the league title.

Fans will hope that their team can start the season strong when they host Spurs on August 13. Three months later, they’ll host their other London rivals, Arsenal, on November 5, before playing the reverse fixtures on February 25 and April 29, respectively. Chelsea also have the west London derby to look forward to now that Fulham are back in the Premier League. They’ll head to Craven Cottage on September 10 before hosting the newly promoted side at Stamford Bridge on February 4.

WHICH CLUBS ARE IN THE PREMIER LEAGUE?

Norwich, Watford and Burnley were relegated, with Fulham returning to the Premier League as Championship winners. Bournemouth secured the other automatic spot, while Nottingham Forest were promoted via the play-offs:

Fixtures compiler Glenn Thompson told Premier League back in 2018: “Traditionally the Premier League, the EFL and Atos representatives will review the fixtures for two days, looking at every date in the season to make sure that wherever possible we have met everything we have been asked to.

“The computer is very useful during the review because if we do not want a certain fixture on a particular date, it will give us alternate dates for that fixture to be moved to. It can be that changing one match may require 40 other changes.

“We also have a working party meeting with representatives from all the leagues, the FA and also a fans representative, from the Football Supporters’ Federation.

He added: “You can’t satisfy everyone. It’s a compromise across all clubs; you can’t do anything to favour any one club.”

First round of fixtures in full 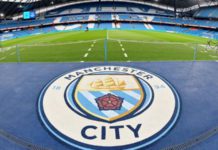 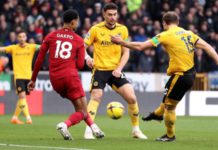 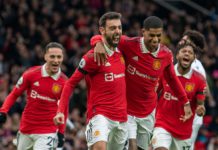 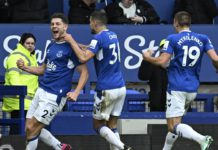 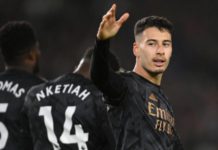