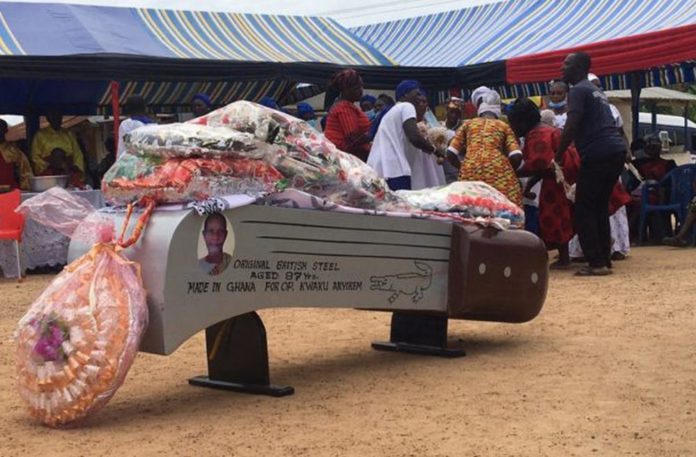 Samuel Addo’s father, John Kwaku Addo, popularly known as Kyirem, a sports producer, has been buried in a cutlass-shaped coffin in a grand style.

Akyirem was buried at Breman Amanor in the Central Region but it’s the shape of his coffin that has grabbed the headlines, telling a unique story of Ghanaian artists.

The image has gone viral on social media and has been trending for the past few hours.

Many people have expressed amazement at how they were able to create it, despite the fact that it is not the first time they have seen a coffin being designed in a special fashion.

Most people are buried in coffins designed to reflect the job or economic activity in which they were involved.

This cutlass coffin was designed to look like a British steel cutlass. It is named after the late Opanin Kwaku Akyikem, who died at the age of 87.

The man may have left behind an agricultural legacy. This may have influenced the family’s decision to choose a casket of this type.