Police have arrested two ‘fake’ Fetish priests who allegedly use social media especially Facebook to defraud inspecting members of the public under the guise of providing them spiritual assistance.

A four-minutes-forty-eight seconds video that has gone viral on social media show the two men in handcuffs while police raided their ‘shrine’ at a yet to be known location.

The two are believed to be notorious fraudsters who present themselves as fetish priests.

They allegedly promise their victims of giving them ‘juju’ to double or make money but in turn end up rather taking monies from their clients.

In the video, a man who was aiding the police to expose their deeds, is heard disclosing how they have defrauded several people.

A box containing fake notes of Ghana cedi which they use to apparently convince clients, is seen in the video. 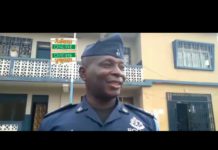