The People’s National Convention (PNC) has set up a three-member committee to develop an action plan for reorganizing the party.

The decision was made at the end of the party’s standing committee meeting which was attended by the party’s 2016 flag bearer Dr Edward Mahama.

On Saturday, the General Secretary Atik Mohammed told Joy News the meeting did not start on time and did not discuss the crucial issues due to disagreements among factions within the party.

But in a statement shortly after Mohammed’s revelation, the party’s Director of Communications, Emmanuel Wilson, said the meeting resolved to hold an early congress, subject to approval by the party’s National Executive Committee (NEC).

In the matter of the pickup vehicle purported to belong to chairman Bernard Mornah, the committee referred the matter to the party’s Council of Elders to deliberate on it and take action.

“All leaders and party members have been admonished to respect the decisions of NEC, particularly in acknowledging and refraining from acts that have the tendencies of bringing the authority of NEC into disrepute,” the statement said.

It concluded that the “Party leadership must act always in ways that portray PNC as a disciplined party poised and ready to form a ruling government.” 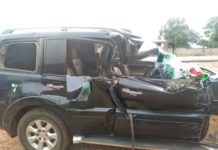