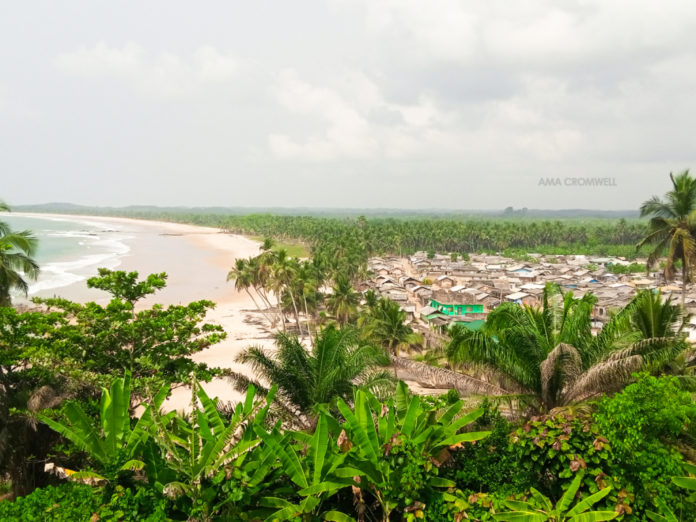 Every year, people do not only hope that the year turns out to be a fruitful one, they also look forward to exploring the world the best way they can.

However, with the Covid-19 pandemic still ‘hanging around’ it might seem implausible to consider traveling abroad.

Thankfully, Ghana as a country has numerous beautiful locations that you may not have explored yet that you should consider visiting.

These three places in the Western Region, have some amazing views that you may like to add them to the to-visit list you have for the year.

Tucked 54.2 km away from Takoradi, the Regional capital, the small ancient town does not only have a touch of European history, but it also holds some traditional values that seem lost in the big cities.

The fresh air and the chirps of birds that greet you at the entrance of the small community tell you indeed, you have arrived at a serene venue to connect with nature and refuel for tasks ahead.

Originally, Princess Town was known as Pokesu [Po-kε-zυ] to wit ‘in the forest’, mainly because the residents were farmers and appreciated the setting of their community.

However, Prince’s Town, which has over the years, metamorphosed into “Princess Town” was named by the Germans when they built a fort and named it Fort Fredericksburg in honour of their Prince, Frederick William I, Elector of Brandenburg.

The town is best known as the site for the Fredericksburg fortress, constructed in 1683. The once-ruined fort was partially restored when former President Kwame Nkrumah used the place as his official residence when he visited the Western Region in 1964.

Princess Town also has one of the most beautiful beaches in Ghana mostly referred to as The Bay. The pristine beach has been much-admired and remains largely undisturbed and very relaxing.

Cap things off with a visit to the Black lagoon, known as Ehonle [ε-ho-lε] to residents of the community. Despite its name, the crystal clear water is sited the forest and does not only have an interesting story to how it came to be but the customary rites that has kept the water in its undisturbed state centuries now.

By the way, if you are a fitness enthusiast, you can embark on the two-hour hike from Princes Town to the lighthouse at Cape Three Point.

Butre is one of the early historical towns generated by the 17th-century inter-European and inter-African conflict. According to some residents, the name ‘Butre’ originated from a group of fishermen whose canoe capsized at sea.

The lost fishermen found refuge at the dry land nearby and subsequently made it their home. To serve as a reminder, the fishermen said to themselves “εha na hεn nsuhεn no butuwee” to wit “This is where our canoe capsized” and the story has since transformed into the term Butre, which is now the name of the town.

Now home to about 400 to 500 people mainly from the Ahanta ethnic group, Butre is 30.9 km away from the Western Region Capital and houses a number of sites and a serene environment.

During your first visit to the small fishing community, what is more striking is the now ruined Fort Batenstein built-in 1656 by the Dutch. However, a hike up the hill to the ruins of the ones vibrant fortress provides an amazing 360-degree view of the entire village, the estuary, the river, rock formations, forest, and hills.

The ride into the wild in a traditional dugout canoe on the Butre River is a must. If you are lucky, you may find some wildlife species such as crocodiles, kingfishers, mudskippers and crabs.

Climax all activities with either a long walk at the town’s perfect beach or enjoy a coconut fruit at one of the beaches’ lodge while you feel the breeze and watch as waves hit the shore.

You may have heard of Cape Three Points a couple of times in the news especially when it is on the topic of Ghana’s oil and gas.

Cape Three Points is at the southernmost tip of Ghana. On the map, you’ll see one tip, but when you climb the 95-year-old lighthouse at the Cape, you’ll see something extremely different and breath taking.

The village of Cape Three Points is the southernmost community in Ghana, and its beach is one of the most beautiful along Ghana’s West Coast.

Surrounded by Ghana’s only coastal rainforest reserve and many rolling hills, the village also has a few secondary attractions, such as relaxation, beach and sea activities, hiking, and exploration of its cultural present and colonial past.

An English author, Robyn Yong said, “We travel not to escape life, but for life not to escape us”. We may not be in normal times, but ones in a while, take time off your busy schedule and reconnect with nature.