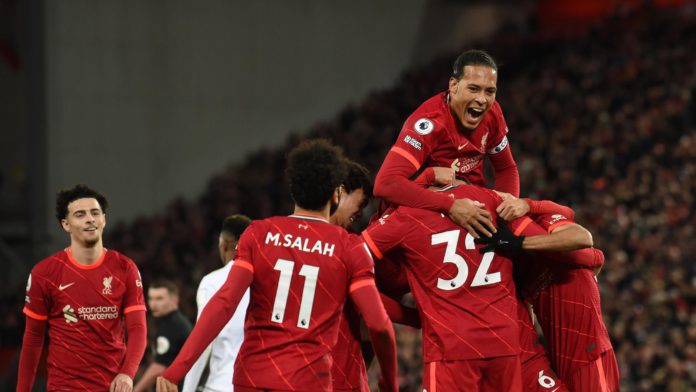 Mohamed Salah got back in the goalscoring groove with a brace as Liverpool surged to the Premier League summit with a 4-0 rout of a woeful Manchester United at Anfield.

The Merseysiders were in irrepressible form as they moved two points clear of Manchester City to crank up the title pressure ahead of the champions’ home clash with Brighton on Wednesday night.

United boss Ralf Rangnick deployed a back five in an attempt to frustrate Jurgen Klopp’s men and try to bolster their own top four ambitions with a positive result, but their game plan was thrown into chaos inside five minutes when Luis Diaz tucked in Salah’s low cross to net his fourth goal for the club.

Both sets of fans then paid tribute to the absent Cristiano Ronaldo in the seventh minute following the death of his baby son, with universal applause ringing out in spite of the fierce rivalry that exists between the clubs.

Liverpool continued to dominate and had United chasing shadows in what proved to be a scintillating half of football from Jurgen Klopp’s men, and they deservedly eased two ahead on 22 minutes.

A slick move ended with Sadio Mane playing a sublime first-time pass on the turn to free Salah to net his first goal from open play since February 19.

United were fortunate to be just the two behind at the interval but improved briefly in the second period and the hosts were grateful to Alisson for a double save that denied both Marcus Rashford and Anthony Elanga.

Liverpool eventually found some rhythm again and put the result beyond any doubt on 66 minutes when Mane coolly guided home a low, first-time shot after fine play from Diaz and Andy Robertson.

Salah then rubbed salt in the Red Devils’ wounds when he grabbed his 30th goal of the season five minutes from time.

The result keeps the Merseysiders firmly in the title hunt with six matches to play but United drop to sixth, three points adrift of fourth-placed Tottenham having played a game more.

Liverpool are back in Premier League action on Sunday when they welcome neighbours Everton to Anfield. Man United visit Arsenal in a crunch encounter in the battle for fourth spot on Saturday.