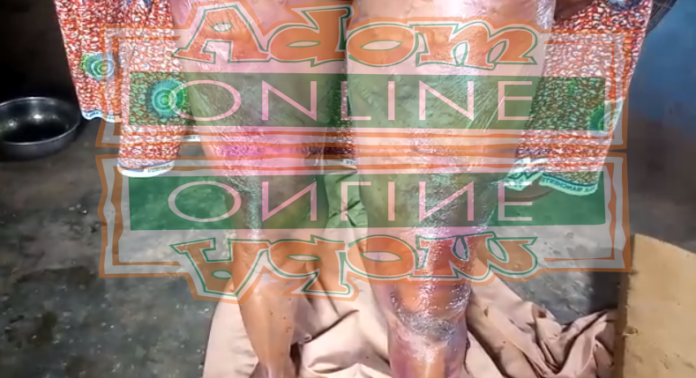 A 40-year-old woman at Nkwanta South of the Oti region, identified as Anifa Amidu, has sustained serious injuries on her thigh after her friend, Mary Oforiwa bathed her with hot water.

The 40-year-old woman was subjected to the inhuman act after she confronted her friend for having an affair with her husband.

Checks by Adom News revealed that madam Amidu heard the news of the affair between her friend and husband from her neighbours.

Speaking in an interview with Adom News, she said she had an earlier fight with her friend and was not in talking terms with her, but did not know it would get to that point.

“I returned from the market this morning and came to meet my husband coming out of the room with my friend when I made an attempt to question her because I felt the earlier confrontation should have stopped her, she quickly run for the boiling water from the fire and poured it on my thighs,” she narrated.

Madam Amidu’s husband, identified as Sulemana Issah and his lover madam Oforiwa bolted after the incident.

The woman has been left alone with her three children.

The case, has meanwhile been reported to the Nkwanta Police Command for the law to take its course.