Some soldiers from the U.S Army were captured on camera while queuing to feast on python meat.
The U.S soldiers who were being trained by their Ghanaian counterparts, lined up to eat prepared python meat during a survival course.
The training took place on May 19, 2017, at the Jungle Warfare School at Achiase military base in Akim Oda, Eastern Region.
It marked the first time an African partner nation trained U.S. Army Africa soldiers.
One of 63 soldiers, Spc. Bryan Young, with the 1st Battalion, 506th Infantry Regiment, 101st Airborne Division who took the course, said in a videotaped interview described the python meat as “extremely spicy,” reported Stripes.com.
Brig. Gen. Kenneth Moore, USARAF deputy commander, said that having U.S. soldiers taught by African instructors was “kind of a ground-breaking event” that like much of what USARAF does, was intended to build partnerships and relationships with African militaries.
“And it contributes to Army readiness,” said Moore, after watching the soldiers in an improvised river crossing. “Exposing them to something they don’t normally train in is an Army priority in leadership training,” he said. “The soldiers’ morale is very high.”
Young said that the course, which taught jungle navigation, ambush offense and defense tactics, and survival tactics, was “eye-opening.”
Sgt. 1st Class Eric Kramer said: “I don’t think anyone will forget this experience, to be honest with you.
“It’s too real, just the threat, the spiders, insects, getting lost in the jungle, hydrating.”
“We’re grateful for our partnership,” the U.S Embassy tweeted Friday, January 5, 2018.
See more photos: 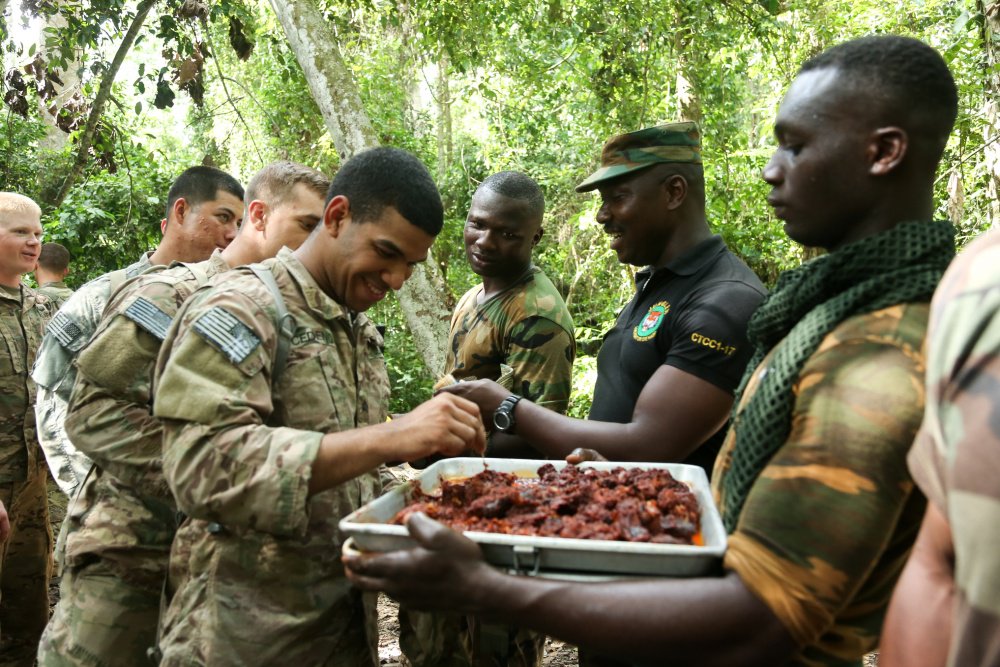