An unidentified Zimbabwe man was given serious thrashing by three prostitutes after he failed to pay for sex services rendered on New Year’s Day in a brothel.

The unidentified man’s third attempt to ‘play now and pay later’ hit a brick wall after he was spotted by one of the hookers he refused topay after having oral sex with him on Boxing Day.

On the fateful day, he was assaulted, fellow hookers took turns to insult him, recording video clips throwing a used condom on his face threatening him with unspecified action if he was to delete the recorded video footage.

“We are here for business not to teach or train you how to have sex with women” one of the hookers was heard shouting as they assaulted him. 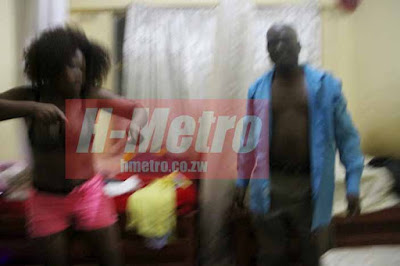 The man refused to identify himself saying he is employed to a uniformed force and it would jeopardize his job.

One of the self-confessed hookers, identified as Tatenda, said the man refused to pay her after sex and her colleague woke up and discovered that he was the same person who duped her on Boxing Day.

“This man hooked me along Samora Machel Avenue and we agreed US$5 for a short time and upon asking for my money after we undressed, he promised to pay after sex,” said Tatenda showing a used condom.

I agreed unaware that he is a liar and my roommate recognised his voice since we are divided by a curtain and informed me that he did it to her on Boxing Day.

He assaulted me after I took his clothes refusing to let him to leave the room and my friends joined me in trying to get paid.

We do not extort clients at this flat but such kind of clients who come here without money for training are not welcome, we are here for money to keep our kids going,” she said.