The much-touted Eastern Corridor road has been a major campaign promise of the opposition NDC since 2009 when the party was in government.

The road which cuts across eight administrative districts of the Volta Region is expected to reduce travelling time from Accra to the northern region by six hours.

Since the campaign promise was made some nine years ago, not much has been done to construct the road large due to failure by government to allocate funds to it.

The only portion of the road that saw completion before the last election was the more than 40 kilometre Dodo-Pepesu-Nkwanta stretch which was undertaken by Kanazoe from Burkina Faso with donor fund from the African Development Bank (AfDB).

In recent times, several portions of the road have worsened because all the contractors working on the Volta Region stretch from Asikuma-Junction through to Damanko have abandoned their work for several months now. 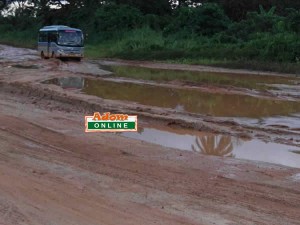 The result is the development of what many residents have described as manholes, trenches and wells on the road.

The worse and dangerous portions are between Hohoe and Jasikan, Jasikan and Kadjebi as well as areas around Kpassah and Damanko

The Akpafu District Pastor of the E.P. Church, Rev. Frank Golo told Joy News in an interview that the current state of the Eastern Corridor road is having economic implications on families.

“I was my motor bike three times a day because of the bad nature of the road. We would be happy if something can be done about it and I will walk ten times on the road if it fixed just to say Lord, thank you” the pastor said.

Private vehicle owners as well as commercial vehicle operators on the road have had their fair share of frustrations including the frequent breakdown of their vehicles. 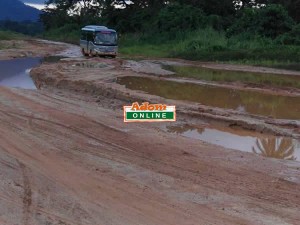 The Jasikan, Kadjebi as well as Nkwanta South and North Districts are major food producing areas of the region. Residents grow several cash and food crops ranging from cocoa and yams, to plantain and vegetables.

A lot of women who are engaged in the sale of these crops are unhappy about the current state of the road.

“We want the government to as a matter of urgency do something about the roads for us “they lamented.

Because of the bad nature of the Eastern Corridor road, some motorists use other less deplorable routes to their destinations.

One group of people suffering from the effect of the poor nature of the road is students. Two of them spoke to joy news, appealing to government to come to their aid.

“We walk long distances to school and it is affecting us in several ways. We are pleading with the government to do something about the road” the students pleaded.

The current state of the road has prolonged travelling time for several hours. The situation is worst for bigger vehicles and trucks like articulators that transport goods from the North to the South.

All said and done, there is no doubt that the famous Eastern Corridor road has become a death trap not only for motorists using the stretch but also a source of agony for the thousands of residents living in more than 120 communities along the stretch.

Residents say they would soon hit the streets in a massive demonstration if nothing is urgently done about the situation.