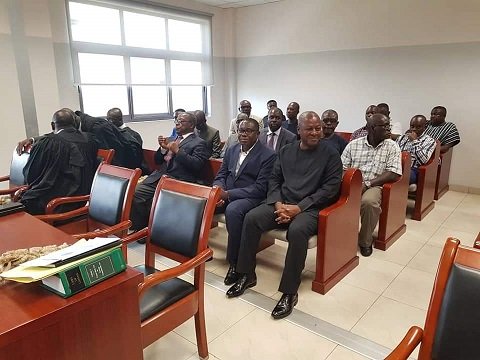 Former President John Mahama and other bigwigs of the opposition National Democratic Congress (NDC) have arrived at the Accra High Court to solidarise with Chairman of the party, Mr Samuel Ofosu-Ampofo.

Mr Ofosu-Ampofo is facing charges of conspiracy to cause harm and assault a public officer following the contents of a leaked audio recording allegedly containing his voice.

General Secretary of the NDC, Johnson Asiedu Nketia, Joyce Bawa and others are part of the party bigwigs at the court Tuesday. This will be Mr Ofosu-Ampofo’s first appearance in court.

Counsel for the NDC National Chairman has welcomed the State’s decision to prosecute his client, charged with conspiracy to cause harm.

“They are welcome”, legal practitioner, Victor Adawudu, said on Joy FM’s Top Story Monday, before adding, the trial will “not go anywhere.”

The trial, which begins Tuesday, will be the first-ever time a sitting party chairman is facing prosecution.

Mr Ofosu-Ampofo, seen as a soft-spoken politician, was heard talking tough in a tape that leaked in February.

The NDC Chairman, while addressing party communicators, allegedly okayed politics of insults and revealed political plans to create a sense of insecurity ahead of the 2020 elections.

He has flatly denied making comments while the party’s 2020 flagbearer, Mr Mahama, has tried to rationalise portions of his comments contained in the tape.

Some had believed that beyond the governing party scoring political points, the saga would not travel the distance of prosecution. The Attorney-General has signalled it will, as it opens a case that Mr Ofosu-Ampofo should be convicted for conspiring to assault a public officer in addition to conspiracy to cause harm.

Mr Ofosu-Ampofo is facing charges of conspiracy to cause harm and assault a public officer following the contents of a leaked audio recording allegedly containing his voice.