Gender-row athlete Caster Semenya married her long time partner in an extravagant ‘white wedding’ ceremony Saturday January 7, 2016 which coincided with her birthday – a double celebration she was delighted to share with her fans.

The 800m Olympic gold medalist wore a ‘Prince Charming-style’ outfit of embroidered jacket, gold breeches and velvet slippers for the ceremony which saw her wed Violet Raseboya, who wore a full-length white lace and appliqué dress.

Sharing a string of intimate photographs of the event on instagram, the South African runner referred to her bride as ‘my heart’ and used the hashtag #ourperfectday to sum up their union. 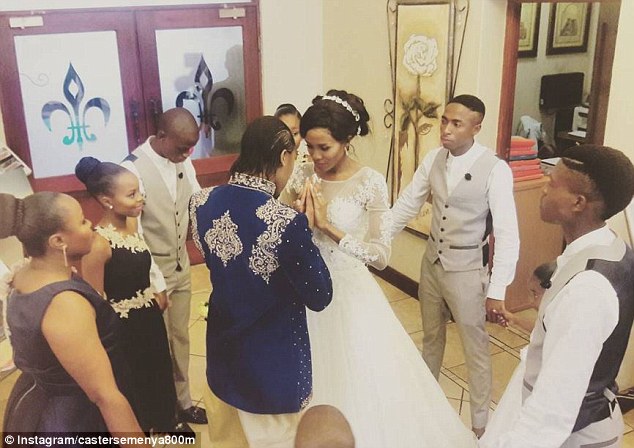 The event, attended by the couple’s friends, relatives, scores of local celebrities and athletes, followed a traditional ceremony a little over a year ago when Caster, who turned 26 yesterday, reportedly paid a dowry of £1,500 to her bride’s family.

Short videos captured at the exclusive wedding venue in the capital Pretoria, show the pair – who changed into sun-coloured traditional clothes and beaded accessories for the reception – taking to the floor alone for a choreographed first dance, with dry ice swirling around them, before later leading guests in a lively, noisy group cultural dance.

Unlike many high profile weddings, guests were left free to capture their own film and images of the day, which were widely shared across social media, prompting positive comments and feedback.

Posted images included the women posing in family groups, with bridesmaids and attendants, and even Violet having her make-up done for the ceremony.

She wore her dark hair in an ‘up-do’ and finished with a diamante band. 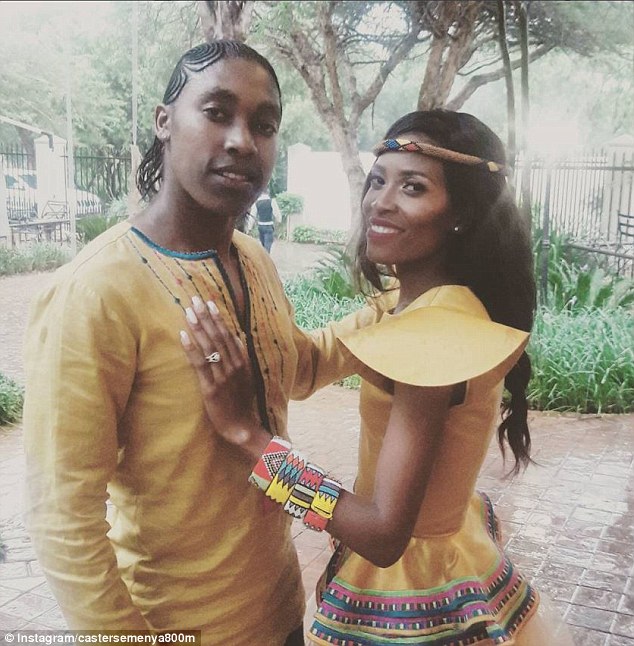 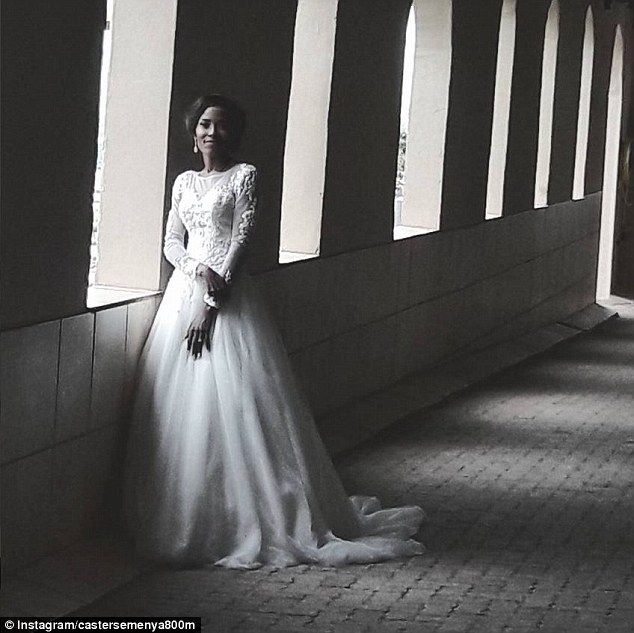 The runner, who was also celebrating her birthday, uploaded several snaps of the event, including her blushing bridge, to Instagram

Guests were given ‘thank you’ gifts of bottles of wine, with special labels featuring the lovers, from the upmarket Uitkyk wine estate near Cape Town.

In one particularly intimate snapshot, the women are seeing clasping each others hands solemnly – apparently at the very moment when they were formally united in marriage.

Caster’s victory at the Olympics in Rio last summer was the most bitterly contested event of the games – and she credited Violet, 30, and her home fans with providing the strength and confidence to confront her critics, or ‘haters’ as she called them.

The runner, who has naturally elevated levels of testosterone and was forced to undergo humiliating gender testing to prove she was female, was once forced to take medicine to suppress her testosterone amid claims she had an unfair advantage.

The rules have since been challenged which means she can now compete without the medication, which provoked protest from her fellow competitors in Rio.

British runner Lynsey Sharp experienced the wrath of the South African’s massive fan base which united behind a #handsoffcaster social media campaign, after the blonde Scot complained about the ‘ unfairness’ of having to compete against the faster woman.

Sharp finished sixth in the 800m final at Rio – despite achieving a personal best time – and has previously complained the South African’s condition resulted in ‘two separate races’. 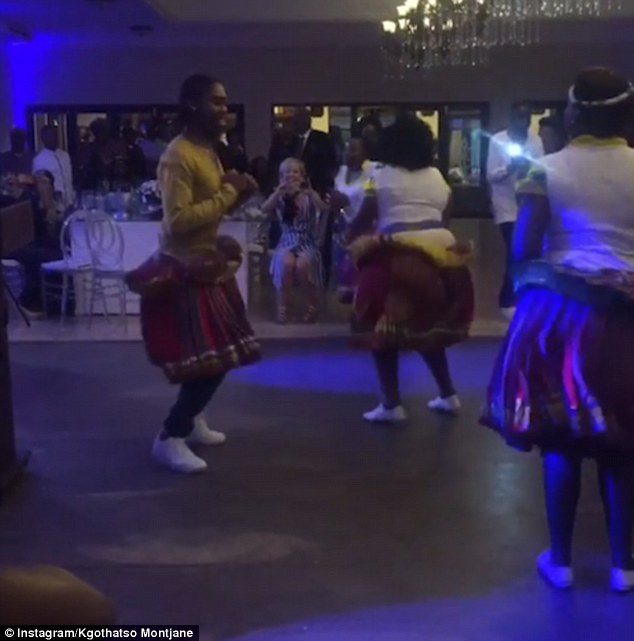 The couple took to the dancefloor to perform a traditional South African dance, pictured 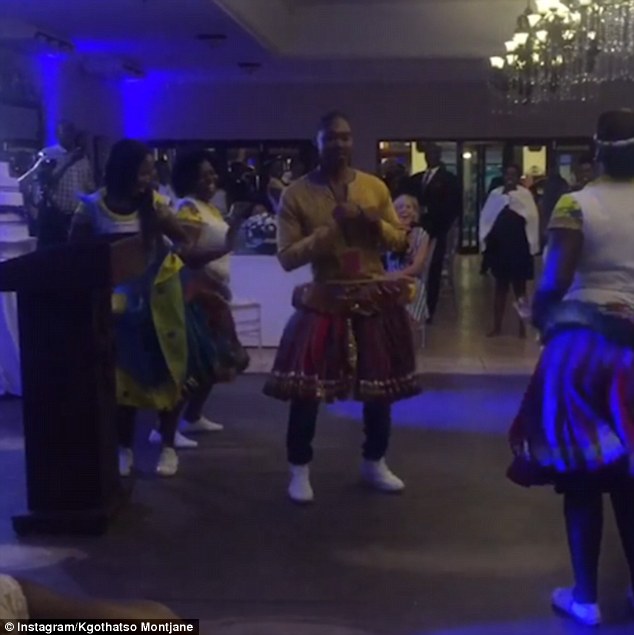 Semenya, pictured during the reception, has naturally elevated levels of testosterone and was forced to undergo humiliating gender testing to prove she was female.

Polish athlete Joanna Jozwik went even further and claimed herself to be the ‘true silver medallist’ and ‘second white’ after finishing fifth behind a white Canadian who came in fourth, two Africans and Caster.

The South African returned home to a hero’s welcome and upon arrival handed her gold medal to Violet, also a runner, in tribute to her support.

She recently completed a degree in Sports Science.

Caster’s ‘intersex’ condition of hyperandrogenism gives her testosterone levels that are three times those usually found in women and approaching those of a man.

She was born with no womb or ovaries and instead, due to a chromosomal abnormality, internal testes.

She spent 11 months on the athletics sidelines while she had tests but was cleared to compete in 2010. 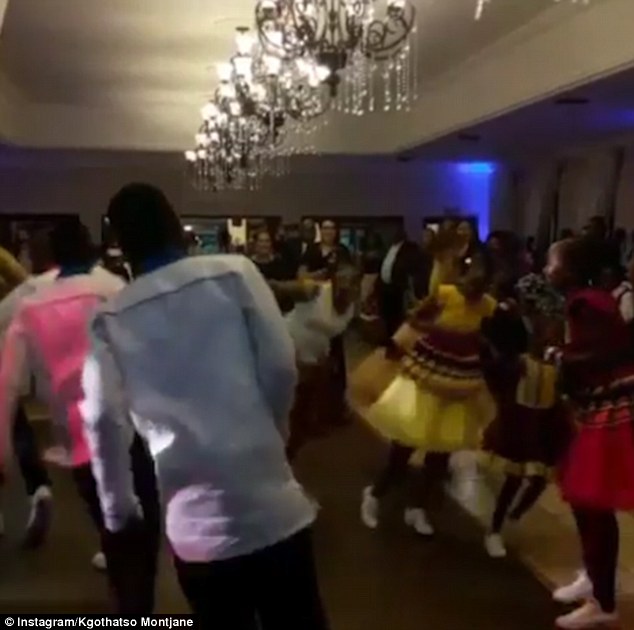 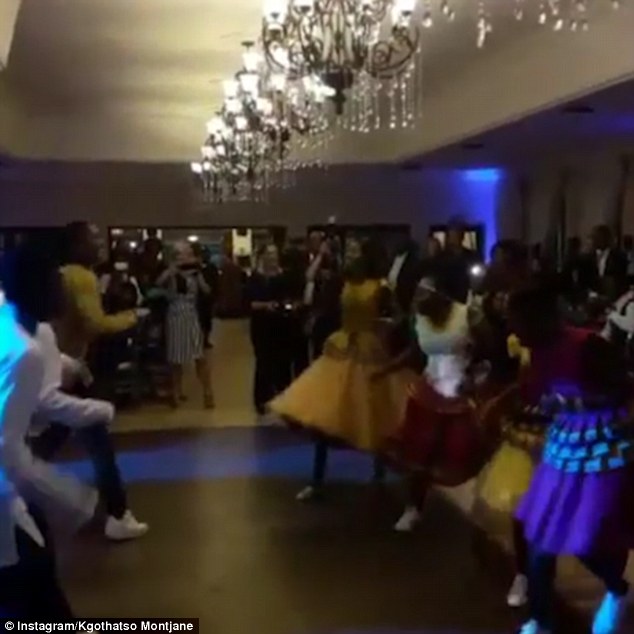 Violet, who is also a runner, was given Semenya’s gold medal last summer as a thank you for her support 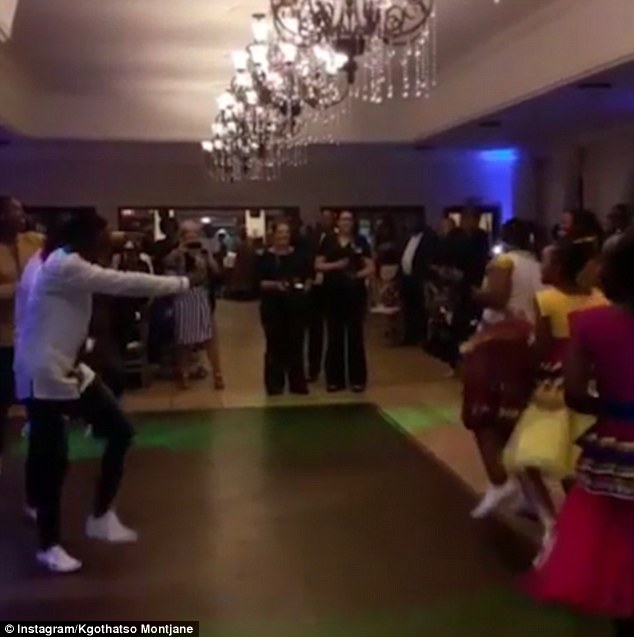 By this time the International Association of Athletics Federations had set a testosterone threshold.

It meant Caster could run again if she took medicine to suppress her testosterone levels.

The ruling was then challenged by Indian runner Dutee Chand, who also has hyperandrogenism.

In 2015, the Court of Arbitration for Sport suspended the rules for two years, meaning Caster could come off the medication.

Critics agree the way she has been treated has shamed the sport, and harks back to 1966 when female competitors at the European Athletics Championship were subjected to a ‘nude parade’ past three gynaecologists.