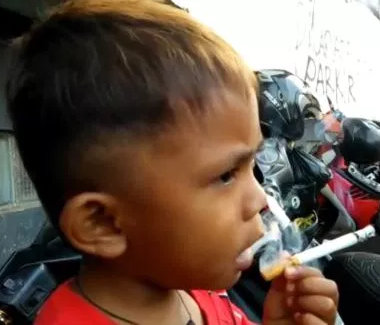 A 2-year-old boy from Sukabumi, Indonesia, has become so addicted to smoking that he smokes up to 40 cigarettes a day.

Rapi Ananda Pamungkas started by picking up used butts outside his mum’s market stall. Within days he became addicted and would endlessly pester passing shoppers to give him cigarettes.

At first, the adults found the toddler’s demands novel and offered him cigarettes, thinking it was a joke. But Rapi – nicknamed Rap – soon started becoming aggressive and throwing tantrums when he couldn’t get cigarettes. 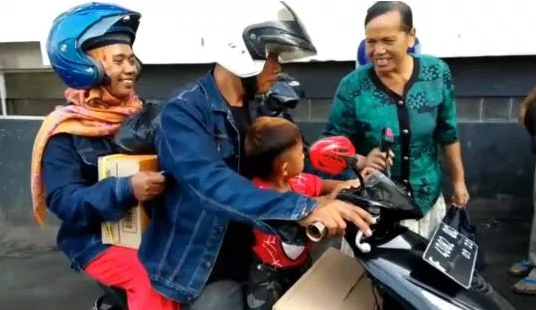 Rapi and his parents on a bike

Rapi’s mother, Maryati, 35, confessed on Monday that she buys two packs of cigarettes a day for the boy to stop him from going “beserk”.

She said: “My child is used to smoking while drinking coffee and eating cake. He has been smoking every day for around two months. If I don’t give him a cigarette, my child goes berserk.”

The mother said that it had been almost impossible to ban her child from smoking because he will “cry all day” if he can’t smoke.

She added: “If Rapi doesn’t get cigarettes he cannot sleep. He will start rampaging and crying. It’s expensive, because we have to buy them for him. He likes to do it all day. He can smoke about 40 every day.” 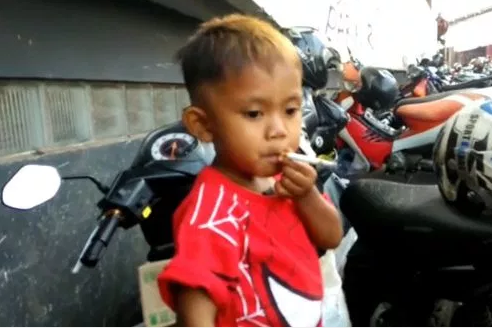 Rapi’s father, Misbahudin, 40, said he also smokes but doesn’t know why his child started the habit.

He added: “I cannot say no to him when he asks for a cigarette. I don’t even smoke that often. I only smoke at work. When my son smokes he likes to have a cup of mochaccino.”

The parents said they will take the toddler to see a doctor to try and get over his smoking addiction.