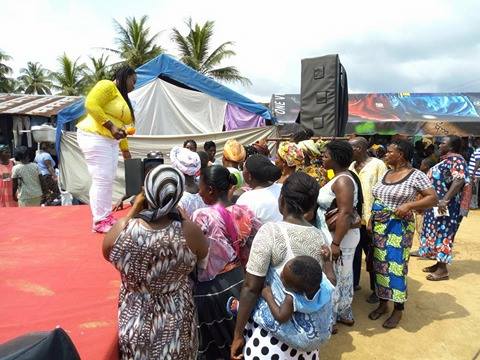 It was the first time the musician cum Occupational Therapist and her medical team took the free medical screening and health talk out of Accra since she embarked on the campaign some eight months ago.
In collaboration with the Ghana National Petroleum Commission (GNPC) Foundation and the Ministry of Health, the Philipa Baafi Foundation screened residents in 14 towns in the first and second phase of the “How Well Are You” campaign tour to the Region.
The 14 towns were Takoradi, Sekondi, Kwesimintsim, Abura, Agona Nkwanta and Aiyinase. The rest were Esiama, Half Assini, Tikobo No. 1, Tikobo No. 2, Sowodadzem, Beyin, Jaway Wharf and Elubo.
The predominantly fishing communities trooped to the various venues to be screened on various illnesses such as Blood Pressure (Hypertension), Body Mass Index, BMI (Obesity), Sugar/Glucose Level (Diabetes), Rapid Diagnostic Tests (Malaria), Physiotherapy (Body & Joint Pain), Eye Test among others.
In all, 21,035 inhabitants were screened. 7,173, representing 34.1% were male while 13, 862 representing 65.9% were female.
3,323, representing 15.8% were children below 18-years, 6,605, representing 31.4% were between the ages of 18 – 39 while 6,184 representing 29.4% were between the ages of 40 – 59.
The aged who were above 60-years were 4,922, representing 23.4%.
Those with Hypertensive Cases topped the chat with 4,544 cases representing 21.6%, followed by the overweight 4, 502 cases representing 21.4%.
Inhabitants with Diabetic Cases were 3,071 representing 14.6%, while those with obesity were 2,987 representing 14.2%.
While the screenings were ongoing in various towns, three people were rushed to the various health centers since according to the medical team, their health conditions were in bad state which needed immediate admissions at a facility.
The three were from Abura in the Ahanta West District, Aiyinase in the Elembelle District and Sowodadzem in the Jomoro District.
Dr. John Gyenfi of Kremlin Medical and Surgical Centre, Kojokrom, Sekondi, advised the fisherfolks to embark on regular check-ups to avoid sudden illnesses.
“Health is wealth so it is always good to pass by and have a check-up. You don’t know what hiding inside your body and what will kill you”, Dr. Gyamfi explained.