A Kenyan pastor identified as Samuel Kakande has, to the amusement of his church members, decided to use football to kick out demons during church service.

In funny video circulating on Twitter and Facebook, the pastor was captured in front of his congregants as he kicked the ball round to deliver people of demonic spirits.

Each time pastor Kakande kicked the ball towards a worshiper; the ‘demon-infested’ believer would wobble and stagger in a hilarious manner and finally drops to the floor.

The rest of the worshipers who could not control themselves looked on and laughed their hearts out while the cleric maintained a stone face and stood firm whenever his flock bowed at his command.

Man whose proposal in church was stopped by pastor breaks silence 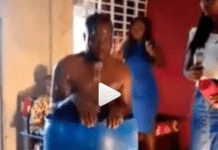 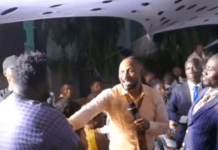