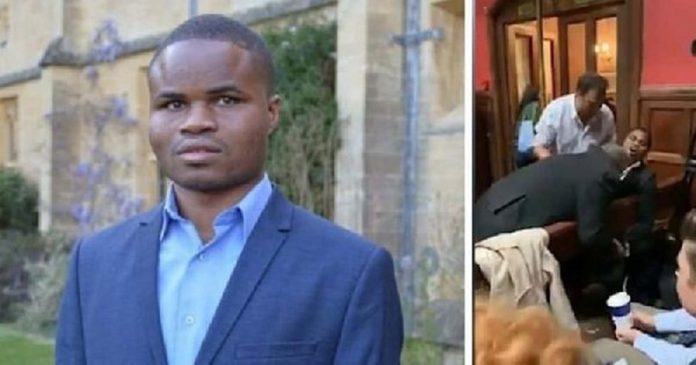 The president of Oxford Union has resigned over a row involving a blind student who was “violently” removed from a society debate.

Ebenezer Azamati was “accosted” by a security guard when he tried to return to a seat he had earlier reserved before the discussion on 17 October.

On Saturday, he was cleared of any wrongdoing.

President of the society Brendan McGrath apologised for his “mistakes” and resigned.

Postgraduate student Mr Azamati, from Ghana, said his treatment made him feel “unwelcome in the union, Oxford and even the country”.

After the charges against Mr Azamati were successfully appealed, Mr McGrath apologised to the Africa Society “for the distress and any reputational damage” to the student.

Helen Mountfield QC, representing Mr Azamati, had said there were ongoing talks with the union over what steps it could take to address the “failings” exposed by the case.

The Oxford Union intentionally resembles the House of Commons

In a letter to the standing committee, posted on Oxford Union’s Facebook page, Mr McGrath said: “For all my shortcomings, and all of my mistakes, I apologise profusely and unqualifiedly.”

He said managing the response to Mr Azamati’s eviction from the debate had been “the most difficult thing I’ve ever been charged with”.

He added he had been asked by those present to bring the disciplinary complaint against him on behalf of a staff member but added he “should have recognised a wider obligation”.

“The right response would not have begun with prosecution and apportioning blame; it would have addressed immediately the extreme distress of all involved,” he continued.

Before signing his resignation, he added he had proposed “a full, public and independent review” of the union’s policies in relation to disability, how it trains its staff and whether the current security system “is fit for the purpose of a student society”.

The Oxford Union, which is independent from the university, has a tradition of hosting debates and speakers stretching back to 1823.

The university previously tweeted its support for Mr Azamati, and said it shared “the widespread outrage regarding the unacceptable treatment” of the student.

We share the widespread outrage regarding the unacceptable treatment of Ebenezer Azamati, a member of our University community, at the Oxford Union. Ebenezer’s college and the University are working to fully support him.