The West African powerhouse will return to the global showpiece after missing out in Russia 2018.

The Black Stars will open their World Cup account against Portugal on November 24 before taking on Uruguay and South Korea respectively.

Ahead of the mundial, Otto Addo has unveiled his provisional squad which includes captain Andre Ayew and Jordan Ayew, Tariq Lamptey, Mohammed Salisu and Thomas Partey.

Meanwhile, Hearts of Oak duo of Daniel Afriyie Barnieh, Denis Korsah and Kotoko’s Danlad Ibrahim are the only local players to have made the list.

The list will be whittled down to 26 for the tournament which is scheduled to take place from November 20 to December 18, 2018. 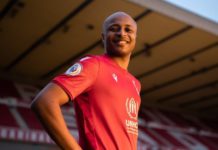