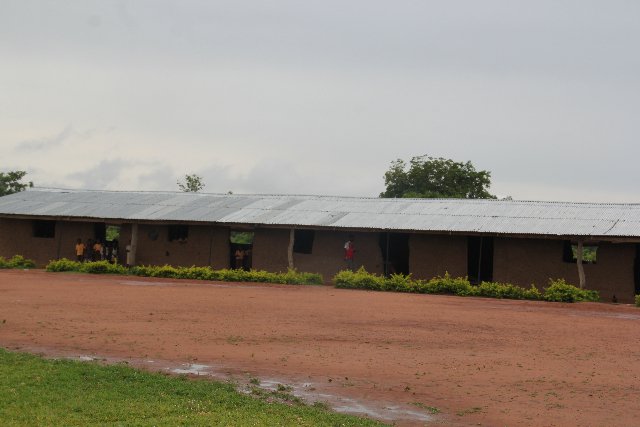 The Chinekope District Assembly primary school built by the community in 2005, is housed in a very dilapidated structure built with mud.

The only educational facility located in the island community in Karachi West district of the Oti Region, is in a very deplorable state and runs an only primary session with a nursery.

It is left at the mercy of the weather especially during raining seasons.

Pupils spend a minimum of four hours -in and out- to access the school by boat from Kete Karachi.

Due to the poor infrastructure and the lack of classrooms, most children of school going age are unable to enroll in school.

The children, who spoke with JoyNews, pleaded with the authorities to do something urgent about the situation to enable them to learn effectively

Headteacher of the school, Vessel Soglo said, the situation is very bad and needs urgent attention from the authorities. According to the headmaster, snakes invade the classrooms causing the pupils and their teachers to abandon lessons.

“How do you expect the pupils to perform as well as those in the cities if the school’s facilities are in a poor state?

“In fact, I love this job so much that I risk my own life to serve the people here. I think the least the relevant authorities could do is to improve our living quarters and the hostels for the children,” one of the teachers lamented.

The District Chief Executive for Karachi West, Douglas Nti Osei, who was on a working visit to some island communities in the area, lamented on the plight of the school and the dangers pupils have to go through each day to access education.

Mr Douglas Nti Osei said they have plans of making sure that all the 64 island communities get classroom blocks to help in effective teaching and learning.

“We are doing our best to ensure that all schools in the island communities are provided with classrooms so we can have our future leaders trained, ” he said.

Ladies, these are 5 things you shouldn’t say to your man...