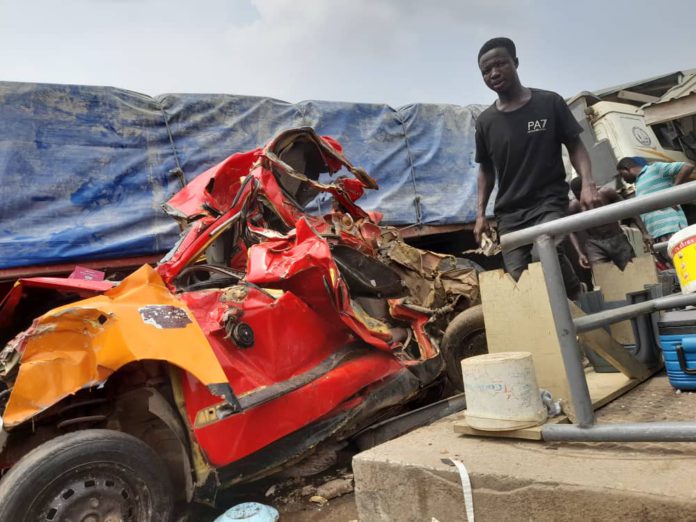 Police at Nsawam in the Eastern Region are on a manhunt for the driver of a trailer responsible for the accident at Nsawam Mobil which led to the death of four women and injured nine others.

The accident is reported to have occurred on Monday afternoon after an articulated truck veered off the road at Aburi Junction, Nsawam due to the driver losing control of his truck and crashing into three taxis.

I was at the scene of a fatal road accident at “Nsawam Mobil”, which claimed 5 lives & left 12 people with serious injuries. I pray for the peaceful repose of the deceased & speedy recovery of the injured. Emergency services & police are also at the scene managing the situation. pic.twitter.com/NazfyoMIGF

Speaking to JoyNews, Nsawam District Police Commander, Superintendent Marian Osei Adu Owusu, said “at the moment the driver of the trailer we haven’t seen him but we have the mate with us at the station assisting in investigations to identify who the driver was and their reason for coming through Nsawam.”

In a tweet, Nsawam Adoagyiri Member of Parliament, Frank Annoh-Dompreh, prayed for the speedy recovery of those injured and the peaceful repose of the deceased.