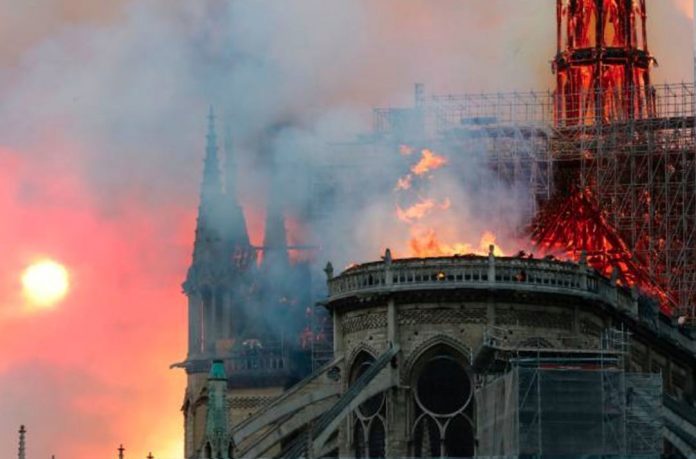 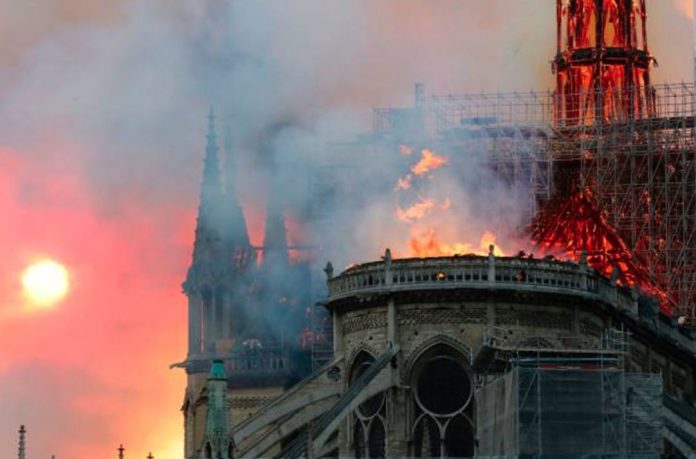 Hundreds of millions of euros have
been pledged to help rebuild Notre-Dame after a devastating fire
partially destroyed the French cathedral.

The fire, declared fully
extinguished some 15 hours after it began, ravaged the 850-year-old
building’s roof and caused its spire to collapse.

But firefighters
who worked through the night managed to save the Paris landmark’s main
stone structure, including its two towers.

The cause of the fire is not yet clear.

The
Paris prosecutor’s office said it was currently being investigated as
an accident, with officials saying it could be linked to extensive
renovation works taking place.

Meanwhile, thoughts are turning to how the Catholic cathedral will be rebuilt.

French
President Emmanuel Macron vowed to reconstruct the historic building
even as the fire still burned, while two French business magnates had
pledged about €300m ($339m; £259m) between them by early Tuesday.

Offers
of help with the reconstruction have also poured in from around the
globe, with European Council President Donald Tusk calling on EU member
states to rally round.

The
fire began at around 18:30 (16:30 GMT) and quickly reached the roof of
the cathedral, destroying the wooden interior before toppling the spire.

Fears grew that the cathedral’s famous towers would also be destroyed.

The whole of the roof was “devastated”, according to the fire service

But while a number of fires did begin in the towers,
French Interior Minister Laurent Nuñez said they were successfully
stopped before they could spread.

By the early hours of Tuesday,
the fire was declared under control, with the Paris fire service saying
it was fully extinguished by 10:00 local time (08:00 GMT).

What is the damage?

Search teams had already begun assessing the extent of the damage when dawn broke over the French capital. The cathedral’s blackened stone and charred scaffolding were revealed to onlookers for the first time.

According to fire brigade spokesman Lt-Col Gabriel Plus “the whole of
the roof has been devastated… a part of the vault has collapsed, the
spire is no more”.

However, it could have been much worse. Mr
Nuñez said that, had fire crews not entered the building, “without doubt
it would have collapsed”, French newspaper Le Monde reported.

Photos
appear to show that at least one of the cathedral’s famed rose windows
has survived, although there are concerns for some of the other
stained-glass windows.

Franck Riester, France’s culture minister, warned
that while the principal structure had been saved, the building was
still unstable.

There were already fears about its stability, after cracks appeared in the stone.

Sections of the building were under scaffolding as part of the renovations and 16 copper statues were removed last week.

Individuals and groups are mobilising to help rebuild Notre-Dame. Hundreds of millions of euros have already been pledged.

Another
€200m was pledged by Bernard Arnault’s family and their company LVMH – a
business empire which includes Louis Vuitton and Sephora – on Tuesday
morning, according to Reuters news agency.

The French charity Fondation du Patrimoine is launching an international appeal for funds for the cathedral, a Unesco World Heritage site.

Visiting the scene on Monday night, Mr Macron – who said the “worst
had been avoided” with the preservation of the cathedral’s main
structure – pledged to launch an international fundraising scheme for
the reconstruction.

“We’ll rebuild this cathedral all together
and it’s undoubtedly part of the French destiny and the project we’ll
have for the coming years,” said Mr Macron.

“That’s what the French expect [and] because it’s what our history deserves,” he added, visibly emotional, calling it a “terrible tragedy”.

Offers of help have also been pouring in from around the globe, with
Russian President Vladimir Putin saying he is happy to send experts to
help restore the cathedral.

The British government is also
looking into what it can do to help with its reconstruction, according
Ed Llewellyn, the UK ambassador to France.

Spanish Culture
Minister Jose Guirao said his country is also seeking ways to help –
although, he added, “right now, above all, it’s about moral support,
solidarity and from there, whatever they need”.

What about the cathedral’s treasures?

Emergency
teams managed to rescue valuable artwork and religious items, including
what is said to be the crown of thorns worn by Jesus before his
crucifixion, which were stored inside the cathedral built in the 12th
and 13th centuries.

A tunic, which King Louis IX is said to have worn when he brought the crown of thorns to Paris, was also saved.

“We
had a chain of solidarity, especially in saving the works of art…
[They] were able to be saved and put in a safe place,” said Paris Mayor
Anne Hidalgo. “This is a tragedy for the whole world… Notre-Dame is
the entire history of Paris.”

Historian Camille Pascal told French broadcaster BFMTV that
“invaluable heritage” had been destroyed. “Happy and unfortunate events
for centuries have been marked by the bells of Notre-Dame. We can be
only horrified by what we see.”

How has the world reacted?

Thousands
of people gathered in the streets around the cathedral, observing the
flames in silence. Some could be seen openly weeping, while others sang
hymns or said prayers.

Several churches around Paris rang their bells in response to the blaze, which happened as Catholics celebrate Holy Week.

“Notre-Dame is burning, France is crying and the whole world, too. It is extremely emotional,” Archbishop of Paris Michel Aupetit said.

The Vatican expressed “shock and sadness” while UK Prime Minister Theresa May described the fire as “terrible”.

Unesco
said it stood “at France’s side to save and restore this priceless
heritage” visited by almost 13 million visitors each year, more than the
Eiffel Tower.

US President Donald Trump said it was “horrible to watch” the fire and suggested that “flying water tankers” could be used to extinguish the blaze.

In
an apparent response, the French Civil Security service said that was
not an option as it might result in the collapse of the entire building.

Because of the fire, Mr Macron cancelled a speech on TV in which he was due to address the street protests that have rocked France for months.