The District Chief Executive for Atwima Mponua in the Ashanti region has described as false claims by the Chief of Nyinanhini, Nana Amanpene Twum Boateng II that he incited the youth in the area against mining company, Exton Cubic Group Limited.
According to Williams Darko, he personally seize mining equipment and prevented the partners the firm, Engineers & Planners, from entering the bauxite concession.
The chief in the area took a swipe at Atwima Mponua DCE for his role in an attack on a mining concession belonging to Exton Cubic Group Limited.
He accused Williams Darko of inciting the youth to seize mining equipment and prevented the partners the firm, Engineers & Planners, from entering the concession.
Nana Amanpene Twum Boateng II warned the action of the DCE could have triggered the events akin to what was recorded in the Central Region town of Denkyira Obuasi, which led to the lynching of an army officer.
But reacting to the issue on Adom News Tuesday, Williams Darko expressed shock at the assertions of the chief.
He maintained that, he never mobilized the youth in the area to create unnecessary tension in the area.
“I personally stopped the mining equipment of Engineers & Planners from entering the concession until I get the necessary documentations and later informed the police. I never mobilized the youth” he stressed.
The Atwima Mponua DCE believes the chief is reacting on hearsay since he was not there when the incident occurred.
Williams Darko who has vowed to protect state property said the equipment will remain in the custody of the police until the right things are done.
“I have vowed to protect any property of the state and I won’t allow anybody to mine the in bauxite concession until they bring me the necessary documents” he opined. 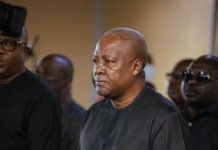