Nigerian President Muhammadu Buhari will become the first leader from sub-Saharan Africa to be received by US President Donald Trump when he arrives in Washington for talks later.
They are expected to discuss shared economic and security interests.
But many will also be watching the talks closely after a row over Mr Trump’s alleged use of the word “shithole” to describe African nations.
Mr Trump denied being a racist after the reported crude remark.
He also denied making the comment

What’s the agenda for Trump-Buhari talks?

The two leaders may be keen to put the scandal behind them to focus on more pressing issues, writes the BBC’s Nigeria correspondent Mayeni Jones. 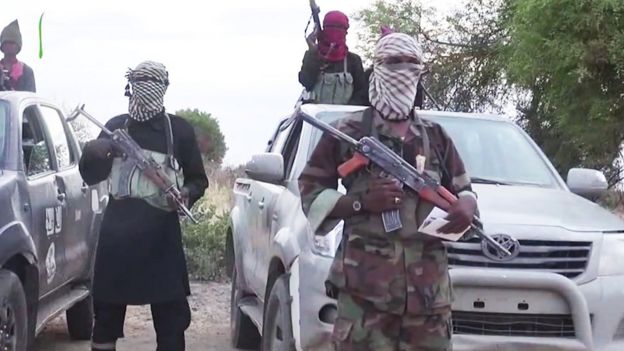 Boko Haram militants launched their insurgency in 2009
At home, President Buhari faces multiple security challenges, including the nine-year-old insurgency by Boko Haram jihadists in the north-east, and mounting insecurity in the centre of the country.
So fighting terrorism is a priority for both administrations, our correspondent adds.
The White House recently sold 12 counter-insurgency aircraft worth $496m (£360m) to Nigeria to help in its fight against Boko Haram.

The US previously refused to sell military aircraft to Nigeria, citing human rights concerns.
In Washington, Mr Trump and Mr Buhari will also discuss ways to deepen economic cooperation between both their countries.
Mr Buhari, who is seeking re-election in 2019, is also expected to stress that he is committed to democracy despite rampant corruption and poor governance in the West African country.

In 2015, he became the first opposition leader to be elected president in Nigeria.

After the talks, the Nigeria leader is due to meet businesses specialising in agriculture.
Senior Nigerian government officials will also discuss a number of projects with executives from major US transport companies.