Pollster and Managing Editor of the Daily Dispatch Newspaper, Ben Ephson has described President Nana Akufo-Addo as a wise and smart person over the way the President handled the suspended Parliament chamber.

“Akufo-Addo has been very wise and smart with proposed construction of the new chamber. He won the 2016 election by about 980,000 margin and could have said he will stake his popularity on the new chamber but he didn’t.” he said.

To Mr Ephson, he wondered why Members of Parliament wanted to spend $200 million on a new chamber when Ghana’s colonial master, the British, on whose system Ghana’s democracy and governance is modeled, has its parliamentarians sitting on benches.

Speaking on Accra-based Class FM, monitored by Adomonline.com, Mr Ephson said though the project had been dropped for now, the reasons that were given were not concrete enough.

“Any President or Parliament that wants to dare Ghanaians should agree on the new chamber and let’s see what happens,” he dared. 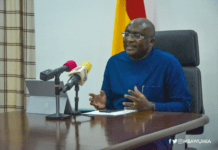