Actress Yvonne Okoro has denied ever dating retired Ghanaian footballer Stephen Appiah.
The two, on social media, have been rumored to be dating but in an interview with Delay on the Delay show, the actress who is of Nigerian and Ghanaian descent emphatically denied such claims.
“It’s funny for me because, it’s not the first time I’ve heard this and it will obviously not be the last. I’ve met Stephen Appiah’s wife before. He, together with his kids, came on the season one of my ‘Dinning with Yvonne Okoro’ show because I wanted to feature his daughter on the show.”
She added that, “Stephen Appiah is like a family friend. I didn’t call Stephen Appiah for my father’s birthday, my father called Stephen to come. Why because, Stephen Appiah manages my brother. My brother is a footballer; Kenneth Okoro. We built a friendship, he’s that type of person I can call and sometimes, he calls me when he hears something negative about me to tell me to be careful.”
Reacting to claims that she was seen kissing the retired footballer at the Golden Tulip Hotel in Accra, she said;
“They are liars! People can see two people hugging and say they’re kissing or having sex. They can see two people holding hands and go like oh my goodness, there’s a relationship.”
Yvonne Okoro however revealed that she’s currently in a relationship with someone who’s not a Ghanaian.
“I’m seeing someone…we’ve been together for almost two years and he’s not Ghanaian.” 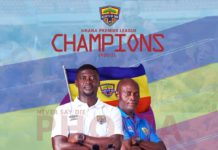 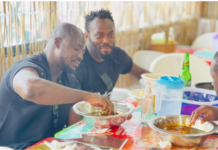 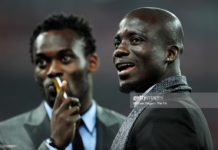