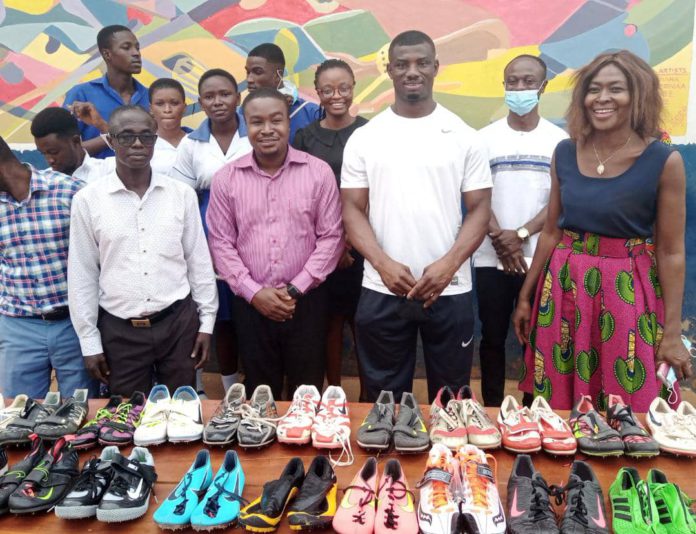 Mr Ampomah extended his kind gesture to the second cycle school in the Asante Akim Central Municipality as part of his philanthropist project aimed at helping the underprivileged school in sports.

The United States-based Ghanaian athlete -javelin thrower – made an appreciable donation of 22 pairs of track spikes to Wesley SHS earlier today while on summer holidays.

Mr Ampomah holds the national javelin record of 83.09m since 2016 and represented Ghana at the 2016 Summer Olympics in Rio de Janeiro, Brazil. He was the captain of the Ghanaian team in Rio.

Speaking to the media at the short ceremony, he said his dream is to support the school to become a force to be reckoned with in the Ashanti Regional Inter-School and Colleges Competitions and also to unearth talents to become national heroes.

“I’m a native of Konongo whose dream was realised with no technical support at the early stage of my javelin throwing career which informed my decision to embark on this donation to aid the school to unearth the numerous talents at Konongo and its environs,” he said.

Headmaster of the school, Rev. Bright Osei, who received the donation on behalf of the school, expressed his gratitude to the two-time SWAG Male Athlete of the Year for his kind gesture and promised that the school will make good use of the items at the Ashanti Regional Inter-School and Colleges competition.

Rev. Osei also made a humble appeal to the general public and old students of the school with such items to attain sporting excellence after winning two gold medals at the 2014 Ashanti Regional Inter-School and Colleges competition.