Minister of Education, Mathew Opoku Prempeh, has assured the National Association of Graduate Teachers (NAGRAT) of prompt payment of its GH₵50 million arrears.
According to him, government is negotiating with the various teacher unions to pay all monies owed the teachers.
Read HOT VIDEO: Ebony’s brother sings sorrowfully to mourn her
Napo, as he is popularly called, gave the assurance after NAGRAT threatened to go on strike if the arrears are not paid.
At a news conference held in Accra, incoming President, Angel Carbonu, said their threat follows government’s failure to fulfill its side of the bargain after several meetings.
He explained that, the arrears include vehicle maintenance allowances, transfer grants and transport and travel allowances.
Read Police arrest woman who tried to smuggle “wee” wrapped in banku to inmates
Angel Carbonu said they will be left with no other choice than to lay down their tools until the money is paid.
But speaking on Adom FM’s morning show, Dwaso Nsem, the Education Minister said the GH₵50 million arrears were accrued during the erstwhile Mahama-led administration.
Read VIDEO: Meet the man who can mimic over 70 animals
He indicated that, though government is still in talks with the teacher unions for an amicable solution to the matter, they cannot be blamed for the delay.
This notwithstanding, Napo said they have paid part of the monies after they were validated by the Finance Ministry.

UTAG to strike on Monday 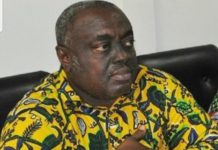 Our members will not take any more explanations – TEWU