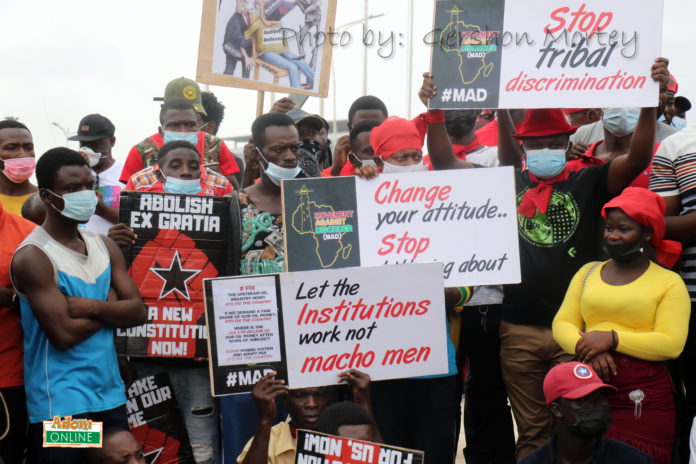 Tsooo boi, Tsoo boiiii, bueiiiii. I am in an admixture of sadness and hope to throw the intellectual wisdom, image and the sacrificial political force  and international genuine acclaim  in the name BUSIA in support of this potent youth movement to fix the country and to speak eloquent unmistakable Truth to Power to initiate a systemic national reconstruction drive-by truthful Reflection and Remedial action

Tsoo Tsooo boiii, It is quite fascinating that those calling themselves  Danquah- Busia-Dombo/UP Tradition, having promised so much, in their failing delivery as such, have precipitated outdooring of  #fixthecountry march and rally which overwhelmed their August 4, Founders’ day.

I am absolutely sure that Dr K.A. Busia who was a Founder of the United Party “UP” and its Parliamentary Leader in Opposition who seconded the Independence motion with brilliance would be enthused to be part of this historic Ghana Rising moment by the youth to fix the country.

“To wit, elders must not sleep on their laurels when the youth are in abject distress.” The fix the country youth movement is doing exactly what Kofi Abrefa Busia would have them do by dedicating his most outstanding socio-cultural and politically directional scholarly book with vision, “Africa in search of democracy” as follows, “I dedicate this book to the Youth of Africa to whom will fall the Opportunity and the Honour of Building in Africa Democratic Societies wherein Every man and woman may live a Life of Dignity in Freedom”.

•  Is the fix the country movement, not a “prophetic” and proficient taken up of Kofi Busia’s ageless clarion call to the youth?

• Is it not a life of “Dignity in Freedom which the “Kukrudu NPP” uses as a mantra that the youth seek in a democratic Ghana?

I am utterly perplexed that We should build a national Cathedral for God whose dwelling place is the heavens by  Presidential ‘destructive’ fiat,  while we give “serpents” to our hungry youth for their living bread because our governance has demonic attacks? It is unbiblical. It is undemocratic. Let us stop the bleeding of national lands, luxury cars and houses and everything else into private underhand political and crony pockets while our youth Perish in poverty and hopelessness.

Twooo boi. Agoo eei, I sincerely support the fix the country resounding initiative in the God-fearing Busia tradition of sure progress with humility and selfless service with integrity so that we can ALL have “Dignity in Freedom” at this pivotal and poignant moment when the UP tradition is supposedly in power? I should think not?

*It is noteworthy that neither Dr J.B Danquah who was never an ‘ELECTED’ member of Ghana’s Parliament nor the UGCC that had been defeated completely by Dr Nkrumah’s CPP were part of the United Party or the Independence Parliament!

l am in a rather sombre mode to dare say we need the country’s collective leadership especially the “Danquah” H. E. Akufo Addo government, to just stop in their heavyweight kukrudu stampeding tracks for a quiet moment and empathize with our suffering masses and our youth who are bearing a torchlight to their deserving future by demanding that the country be fixed.

*We do not need undignified debt forgiveness following reckless borrowing and unaccountable spending which is debased with selfish economic mismanagement tooted as a positive change.

Let us have a COUNTRY that distinguishes right from wrong, that can say this is good and that is bad: let us  have none of it and let wrongdoers be punished for our own sakes and for posterity that  will grade and berate  us for being raiders of our “Noble Ark “as we  brandish stealth as wealth worthy of emulation.

I certainly believe that with Almighty God’s help I should and can live for something greater than myself. That, with commitment and sacrifice, I could help a crumbling Ghana get up on its feet. We all could.