Majority Leader, Osei Kyei-Mensah-Bonsu has said embattled President, Robert Mugabe’s resignation is long overdue.
He could not fathom why Mr Mugabe, after mismanaging the economy of Zimbabwe failed to hand over power until he was forced out.
“This Zimbabwe issue is very worrying and I think his resignation is long overdue because some African leaders like Mugabe failed to hand over power and always extend their tenure to achieve their own selfish interest.
“I think this decision is good for the ordinary citizens of the country but bad for Mugabe and I think it’s a disgrace to Africa” he said on Accra based Neat fm.
Robert Mugabe shocked Zimbabwe and the world when he resigned as president on Tuesday, ending his 37-year grip on power.
Thousands of Zimbabweans took to the streets of Harare in a jubilant mood minutes after the embattled president issued a letter stating his intention to resign from office. 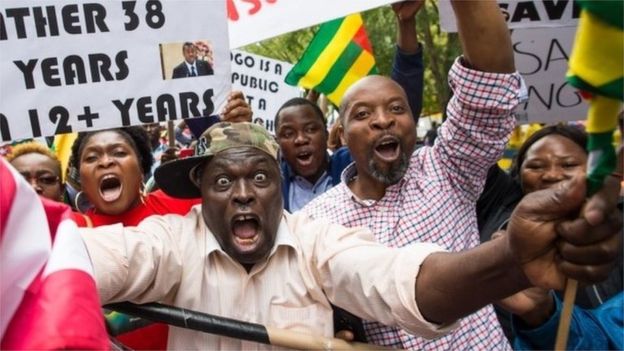 Mugabe’s resignation was made known just minutes after members of the Zimbabwean parliament were starting an impeachment process against him.
His resignation was thus announced by the speaker of parliament, Jacob Mudenda, who is currently the acting president of the country.

But reacting to the issue, Mr. Kyei-Mensah-Bonsu, who is also the Minister of Parliamentary Affairs stated that, Mugabe’s failure has little to do with the West adding that majority, has to do with his gross incompetence.
He called on African leaders to gracefully demonstrate some dignity by handing over power when their time is due.
“It’s just unfortunate that Zimbabweans have to go through this turmoil under Mugabe. It should serve as a lesson to all African leaders who refuse to hand power even when their time is due” he noted.