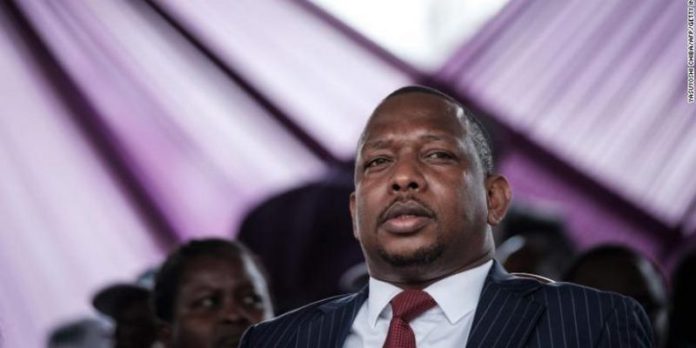 The governor of Nairobi has ignited an explosive debate amongst Kenyans over the issue of children born out of wedlock to powerful politicians and their lovers.

After Member of Parliament Ken Okoth died from cancer at the age of 41 last month, Nairobi Governor Mike Sonko, publicly detailed an alleged affair between the late MP, who was a friend of his, and a woman who was nominated for Nairobi’s County Assembly.

Sonko, 44, declared at a memorial service broadcast on local television: “Ken had a son with one of the nominated Nairobi MCAs [Members of County Assembly]. The two lovebirds did not hide the fact that they shared a son as demonstrated by pictures and various documented correspondence.”

Governor Sonko made his comments to a gathering of mourners that included Okoth’s Italian-born wife, whom he met at college in Austria, and with whom he had no children.

Sonko’s words unwittingly touched a raw nerve, sparking criticism from some politicians and dividing opinion in this deeply religious and conservative society, where such family matters are expected to be aired only in the privacy of the home.

Member of Parlament Ken Okoth is remembered at his funeral.

CNN’s efforts to reach Sonko and his staff for comment were unsuccessful. When asked about the governor’s comments, Okoth’s brother, Imran Okoth, told CNN: “No comment. It’s a personal matter.” The alleged mother of Okoth’s child declined to comment.

Nairobians immediately took to social media with the hashtag #Sonko to jokingly warn each other not to share their secrets with the governor, who would inevitably spill them in a very public manner.

But Sonko claimed to have a higher purpose for his utterances. He declared to the mourners: “My humble appeal is that even as we prepare to bury Ken, let’s not forget his son. He too needs and has a right to participate in the send-off of his beloved dad. The family should accept that Honourable Okoth’s son enjoys legal protection and recognition.”

Sonko, who has three children, can best be described as a maverick operator. But his comments reflect a very real problem in Kenya, where many children go through life without any paternal assistance.

According to the 2014 Kenya Demographic and Health Survey (KDHS), almost half of Kenyan children did not live with both biological parents and 22% of children come from single mother households even though their fathers are alive.

In a 2017 case in which a man pleaded poverty as the mitigating factor in his inability to support his child, a high court judge ruled that men cannot escape the responsibility of providing for their children even if they claim to not have the means to do so.

Nairobi’s Governor Mike Sonko speaks to the media after elections in April 2017.

Sonko continued the debate about parental responsibility by taking aim at his fellow politicians. He posted two phone numbers on his Facebook page and invited women to contact his office if they’d had similar experiences with lawmakers.

“When sending details on which MP, Senator, Governor, Businessman has impregnated you, remember to send his full names and the position he holds plus any photos or videos of those happy moments so that we expose them,” he said in another post.

On Friday, Sonko announced on Facebook that he had received numerous complaints from women via his hotline. His “investigation,” as he described it, found that numerous politicians had impregnated their girlfriends and had “refused to take responsibilities [for] their babies.”

Sonko said evidence of some of these transgressions would be published soon in newspapers and on his Facebook page. None of these claims could be verified by CNN.

The fallout from Sonko’s comments at the funeral split opinions in Kenya’s capital. Was the governor right in exposing his legislator friend’s alleged infidelity so publicly?

Brandish Kotia, a restaurant owner, told CNN: “What Sonko did wasn’t right. Those are family affairs. They could have just talked to each other, there was no need to make it so public.”

Mary, a shopkeeper in Nairobi’s Westlands District who declined to give her last name due to the sensitivities of commenting on politicians, agreed with Sonko: “It will be a lesson to everybody. There is too much hiding and when you try to tell the men, they don’t want to hear about it. But now everybody will be alert.”

The men CNN spoke to largely refused to comment and shook their heads at the governor’s audacity. “He’s letting us men down,” said a taxi driver, before he drove off.

And despite the governor’s public concern for single mothers, there have also been growing questions about how the Kenyan parliament treats its women members. In June, a male legislator was accused of physically assaulting a female MP, and last week a female MP was kicked out of parliament for bringing her five-month-old baby into the chamber because current rules do not allow children.

There has been tension too between female legislators, women’s rights groups and Sonko after the episode at the funeral.

She wrote that, unlike the governor, she doesn’t “yap at funerals,” adding that she had worked hard to pass laws that protect all children. “I … pushed for article 53 of the constitution that protects the late Ken Okoth’s son. Once the DNA confirms that he is Ken Okoth’s son, he will be entitled under the succession law to inherit from Ken’s estate. He is protected. He is covered,” Odhiambo said.

The governor took the bait and shot back to Odhiambo in yet another Facebook post: “I am longing for the day you shall open your legs to give birth to a child so that you experience the pain that the mothers I am defending go through. You must respect those single mothers who struggle with their kids as men go missing.”

With that, Sonko lost the respect of Memory Kachambwa, executive director of African Women’s Development & Communication Network, which works for gender equality and women’s empowerment across 47 countries.

“You cannot speak from both corners of your mouth and apply double standards as you purport to speak for women,” Kachambwa told CNN. “It is absurd to aspire to do so when your utterances and actions are heavily sexist and objectify the very same women you claim to speak for. And in any case, who said women cannot speak for themselves?”

Poverty is an unlikely problem for Kenyan legislators, who are paid 76 times what an average Kenyan makes in a year — the second-highest figure in the world after Nigeria, according to an Independent Parliamentary Standards Authority (IPSA) study in 2013 and the International Monetary Fund (IMF).

Given such salaries, many average Kenyans would say that politicians who err in this way ought to be able to afford to look after their offspring.