The Minority in Parliament is demanding a bi-partisan probe into the circumstances surrounding the collapse of two indigenous banks in Ghana.
Cassiel Ato Forson who is the Minority spokesperson on Finance suspects something ontoward may have happened and demanded investigations into it.
Addressing a press conference, Tuesday, Mr Forson said the managers of the two banks- UT and Capital- must be dealt with if they are found culpable of any wrongdoing.
The two companies had their licenses revoked after it emerged they were in distressed state. Their assets were taken over by the GCB Bank in quite a dramatic fashion Monday.
The workers of the two banks reported to work Monday morning but closed as workers of GCB Bank. Their fate will be decided after a skills assessment has been done by the new owners
Even though a number of reasons have been cited for the collapse of the two banks, non-performing loans appears to be the biggest reason.
The Central Bank has already begun investigating the liabilities of the two banks and hinted of sanctions against the managers if they are found to have engaged in any wrongdoing.
But the Minority in Parliament is not impressed with scope of the investigations. Cassiel Ato Forson wants a more transparent, independent investigations into the circumstances surrounding the collapse.
He is concerned about the future of GCB Bank and how it will be able to manage the liabilities of the two banks.
For a company that has shareholders, the former Deputy Finance Minister wanted to know if there was a resolution by the shareholders before the takeover was done.
According to him, it was the erstwhile NDC government that saved the GCB from total collapse after the TOR debt left the GCB Bank in distressed state by the Kufuor government TOR debt.
He wants assurance that the takeover will not lead to GCB Bank going red again.
Corporate Secret
Cassiel Ato Forson accused the vice President of making public a leaked report on the state of commercial banks in 2016.
Dr Mahamudu Bawumia in the heat of the 2016 elections said some eight banks were in distress because of the poor management of the economy and predicted anyone of them could collapse.
The news about the collapse  of UT and Capital Banks may not have come as a surprise at all given the prediction by the former Deputy Governor of the Bank of Ghana who is now the Vice President.
But Cassiel Ato Forson said the Vice President only took advantage of his position as a deputy Governor of the Bank of Ghana got access to privileged information and made it public.
According to him, the Mahama government caused to be conducted an “Asset quality test” on all the commercial banks in the year 2016.
He said the test was completed after seven months and a report was issued to the government and to the Bank of Ghana Board which he Forson was a member of.
He said a small portion of the report was leaked to Bawumia who then used it on the campain platform.
Now as Vice President, he challenged Dr Bawumia to tell Ghanaians how many banks are now in red and heading towards revocation. 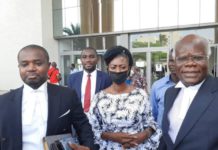 One acquitted and discharged in Capital Bank collapse case