The National Democratic Congress (NDC) Members of Parliament are demanding the withdrawal of security personnel in Parliament ahead of President Akufo-Addo’s investiture.

A statement signed by Minority leader, Haruna Iddrisu said the “excessive abuse of state power to intimidate Members of Parliament represents a desecration of our highly revered parliamentary democracy and a grave affront to the dignity of the legislative arm”.

The NDC Caucus in Parliament notes with disgust and utter revulsion the heavy handed and Gestapo-style invasion of the august House of Parliament by security personnel at the behest of the Akufo-Addo Administration.

Parliaments in every democratic jurisdiction represent the bulwark of democratic freedoms and we insist that this excessive abuse of state power to intimidate Members of Parliament represents a desecration of our highly revered parliamentary democracy and a grave affront to the dignity of the legislative arm.

It is to uphold the universal tenets of good parliamentary democracy that our Standing Orders provide in Order 30:

I) causing or effecting the arrest of a Member or officer of Parliament during the proceedings of Parliament or in the course of his duties;

J) molestation of Members or officers in connection with the performance of their duties in or out of Parliament;

L) attempted intimidation by threats of Members in the conduct of their duties.”

We hold President Akufo-Addo as Commander-in-chief of the Ghana Armed Forces and Chair of the National Security Council directly responsible for this unwarranted and reckless deployment. We shall hold him liable for any breach or obstruction in the discharge of our lawful functions.

The NDC caucus in Parliament demands the immediate withdrawal of this detachment of soldiers, police personnel and purported national security operatives.

We shall continue to resist the mindless assault on the pillars of our constitutional democracy. Ghana is not a dictatorship. Those who seek to erode our democratic gains and usher us into a tyrannic dispensation would be fought and defeated.

The NDC Parliamentary Caucus refuses to sit idle and allow the House of the People’s Representatives to be taken hostage in scenes reminiscent of the recent state-sponsored thuggery witnessed at EC Collation Centres where similar invasions led to needles loss of lives and injuries. 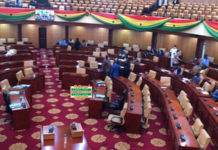