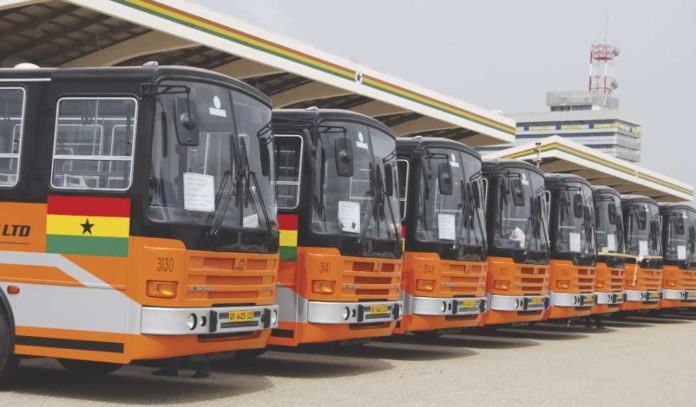 The Managing Director of Metro Mass Transport Limited, Mr Albert Adu Boahen, has said the public-private transport company has between 180-190 buses fully functional and on the roads across the country on daily basis.

The buses, he said are part of the 200 fleet of buses at the disposal of Metro Mass Transport Limited currently and are spread across all 16 regions.

Interacting with some journalists in Accra on Tuesday, September 7, 2021, to respond to a media reportage claiming that 200 buses belonging to the transport company have been grounded and affecting public service, Mr Adu Boahen said such a report lack merit since they do not reflect the true and current state of affairs of the company.

He has therefore urged the public to treat the said media reportage with the contempt they deserve.

According to him, the buses that the said media reportage made reference to are buses earmarked for scrapping and have been parked at the company’s yard since 2014.

“Metro Mass as a Limited Liability Company has a policy guiding scrapping of buses. Buses earmarked to be scrapped are taken through technical examinations to determine whether such buses are viable for operations or not. When that is done, STC will then come in to do a valuation to determine the prices for such buses before they are auctioned. The auctioneers are supposed to cut the buses including the chassis or frames and then take the pieces away. Buses sold as scraps cannot be moved away from the depot in its full form. Also, Metro Mass has state-of-the-art workshops across all depots in the regions with competent Technical team including Technical Managers whose main duties are to maintain and service the buses”, he noted.

He said when President Kuffuor set up Metro Mass, he started with 1,024 buses with a working population of over 4000.

The buses which were procured at the time were to be replaced after eight years to conform to the Buses Acquisition Plan of the company.

However, successive governments have failed to follow up with the plan, resulting in about 85% of the current fleet of buses being overaged which comes with high operational costs.

To the MD, the erstwhile administration led by President John Dramani Mahama got the chance to replace most of the overaged buses with more robust or durable ones.

However, those that were procured by the administration with brands such as TATA, Ashok and Huangai, failed to live up to expectations.

“Some of these buses, after being taken from the port, could not work for just a day. The ones which have portraits of former Presidents and or Heads of State were not meant for inter-city operations and because of how the buses were built, even operating such buses for intra services come with huge costs because of the traffic situation in our cities. These buses were the first version in Africa and didn’t even come with spare parts and were also not in the market. As a matter of fact, it was under President Akufo-Addo’s administration that the company has received assistance including some intercity air-conditioned coaches in 2017 and 2018 which gave back life to the company”, he explained.

On the issue of drivers not working but are being paid, Mr. Adu Boahen wondered how a public-private transport firm that pays its workers from their own resources could do such a thing if their fleet of buses were not on the road on daily basis.

“How could we be paying the workers if our buses are not on the road? If Metro Mass were to be a private organisation, the company will not be operating with 1/3 of its current employees. We have branches in all 16 regions and some districts. We are working with over 3000 direct employees and in these COVID times where giant companies, especially, those in transport and hospitality industries are laying off employees because of the adverse effect on their finances, Metro Mass has not laid off a single employee and we have been able to pay these staff every month among other obligations. We don’t depend on the government for salaries. So, if our buses have been grounded, how do you expect us to meet our expenditure?” he quizzed.

With regards to buses not being washed, Mr Boahen again wondered if the reporters of Onua FM that made the said reportage ever entered the premises of Metro Mass Limited at Kaneshie.

According to him, Metro Mass has a very big washing bay to wash all fleet of buses that were used during the day.

The washing bay, he added, has been so effective that not a single day has it been shut down. He also refuted claims that parts of the premises of the transport company, is full of weeds.

On the future plans of the Metro Mass, Mr. Adu Boahen noted that Akufo-Addo’s administration has shown clear commitment in reviving the company and urged the public to give them their utmost support.

He said plans are far advanced for Metro Mass to receive over 300 fleets of buses by the end of the year to augment its current fleet of buses.

Metro Mass, he added, needs over 900 buses to get to its optimal operation.