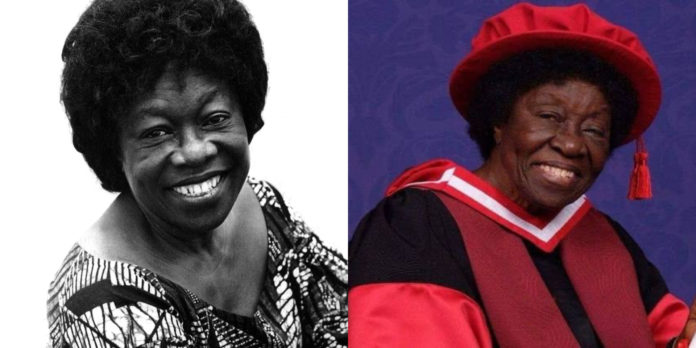 Dr Letitia Obeng is a First Woman Scientist in Zoology, and was the first Ghanaian woman to graduate with a bachelor’s degree in science, as well as the first to be awarded a doctorate in science (1964). She is the sister of the late Madam Theodosia Okoh, the designer of the Ghana flag.

The notion that Science and Technology, is preserve of men has been proven wrong by Dr Letitia Obeng, First Woman Scientist in Zoology, and to her the world is meant for both sexes, therefore, what has been ascribed to be for men, women could also endeavour to do and even better.

Coming from a very humble and religious home many described her as courageous woman who never allowed impediments to claim superiority in her carrier ambition. Being the first woman scientist in zoology, she had colossal passion for living things and water.

Describing her as the grandmother of female scientists in Ghana and an unsung heroine, Letitia, was born on January 10, 1925 at Anum in the Eastern Region, to the Very Reverend E.V. Asihene, a Former Moderator of the Presbyterian Church of Ghana and Mrs Dora Asihene. Little as she was Letitia started her primary education at Abetifi-Kwahu in the Eastern Region and continued at a middle school in Kyebi.

She was fortunate to have her secondary education at the Achimota School from 1939-1946 when she took the London University International Examination since there was no university in the then Gold Coast, those who passed that examination had to continue their university education abroad.

Letitia was then given a government scholarship to do her Bachelor of Science degree in Zoology at the University of Birmingham from 1948 to 1952.

“There were not many girls studying Zoology and only eight girls in that class of which I was the only African and for that matter the only black and that made me stand out of the eight in the class.”

She never thought of the world being a man’s world and that gave her the urge that women could also do what men did and even do it much more better if they worked towards it with determination.

“As a young girl, I never allowed anything to be a stumbling block”, she said with seriousness.

Being so proud to be an African, Dr Letitia Obeng was always in her native cloth, which she was so proud of as an African.

She recounted her experience in England just before she graduated. As the rule was in those days, all female students of the university of Birmingham had to wear black skirt and white blouse on the day of graduation but the young female African, who was passionate of her native dress managed to get the university authorities to change her dress code for her by writing to the Chancellor’s office asking for permission to wear her native cloth for graduation which they agreed.

Letitia then returned home as the first female scientist in Zoology and immediately had an employment at the University College of Science and Technology, which had just started. Heading the Zoology department with an empty laboratory, “all I had were a moldy old microscope, two beakers and a long bench”.

With the help of her husband, who was also working at the College, the laboratory was furnished with the needed equipment and taught three sets of students, who at the end of their courses had good grades with most of them entering into medicine and pharmacy.

“In 1959, I lost my husband George, who was a lecturer at the same university, with whom I had three kids with, two boys and a girl. I then left the University and was the first and the only scientist to be recruited into the National Research Council, which is now the Council for Scientific and Industrial Research (CSIR),” she said.

She was also the first Ghanaian woman to establish a new research institute, Institute of Aquatic Biology for the Ghana Academy of Sciences in 1964.

She undertook a parasitological research, which was presented to her former University as her master’s dissertation in 1960.

This young mother was undaunted in her academic exploits. Two years after, she enrolled at the University of Liverpool for her PHD in 1962 where she obtained her doctorate degree.

For her thesis, Dr Obeng investigated into the life cycle of the Simulium fly popularly called the black fly, which transmitted the worm that caused onchocerciasis or river blindness.

This made her the first Ghanaian female to obtain a PhD in Simuliidae from the Liverpool University in the United Kingdom.

Dr Letitia Obeng ‘s love for water and the environment is amply demonstrated without one being told as soon as one entered her compound and her living room.

The evergreen grass lounge mini forest; artificial types of insects; various animals and a garden of flowers, shows her love for water as well as the environment.

Her passion for water got her job at the Volta Lake Research Project, where she co-managed for four years and looked at a number of environmental issues related to the Lake.

Due to her hard work toward the management of the environment, the United Nations invited her to take part in the 1972 UN Human and Environment Conference in Stockholm, Sweden.

From 1974 to 1985, Dr Obeng was appointed the Director at the Regional Office for Africa of the United Nations Environment Programme, initiator and co-coordinator of the African Sub-Regional Environment Programmes and also held the position of a senior Programme Officer in charge of Water for five years.

She gets so angry and disturbed when she sees the filthy environment in Accra and choked gutters. “It is even worse when it rains and the waste plastics are washed unto the streets and scattered all over the place,” an unpleasant sight that she hates to see.

Every bit of Dr Letitia Obeng ‘s achievements has not gone unrecognized. She has received numerous awards and honoured both nationally and internationally.

She was the first female recipient of the CSIR Award for Distinguished Career and Service to Science and Technology in 1997.

She was also has the CSIR Laboratory named after her “The Dr Letitia Obeng Block” and “Service to Science and Technology” award was bestowed on her in 1997.

In 1998, she received the first national award for Science and Technology, Biological Sciences, the first female Executive Member of the Council of the Africa Leadership Forum.

Dr Obeng is proud to have also been selected among the few Ghanaian women to receive the National Award of the “Star of Ghana’ in 2006 and just early this year, she was unanimously appointed as the first female President of the Ghana Academy of Arts and Sciences.

She has affiliate membership of a number of national and international bodies and they include the Africa Leadership Forum; Royal Society of Arts, UK; New York Academy of Sciences; International Rice Research Institute; International Irrigation Management Institute and the Stockholm Environment Institute.

For her advice to the youth, Dr Obeng: “Whatever you do in life, do it to the best of your ability and after that, you can say this is the best I could do. Then, there will be no regrets. If you do not succeed at the first attempt, try, try and try again.” Though Letitia has officially retired since 1985, she is not tired serving her nation. To her: “Tiredness is a luxury most people can’t afford.” Currently, she is the president of the Ghana Academy of Arts and Sciences.

In 2017, she received an honorary Doctor of Science degree from the Kwame Nkrumah University of Science and Technology (KNUST)

She hopes to see a day when everybody will realize the need to live in a clean environment and ensure that the whole country is clean especially in Accra.

She launched her first book –Anthology of a Lifetime in July 2019. The 381-page book is a compilation of some of the distinguished scientist’s talks, speeches, writings and publications within the last 60 years.