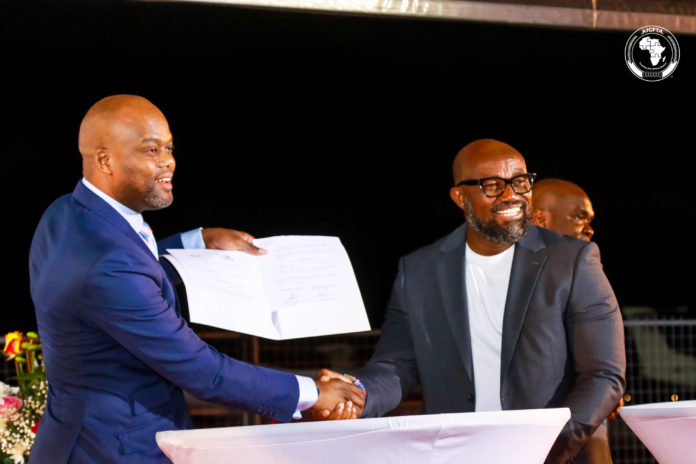 The Chief Executive Officer (CEO) of McDan Group, Daniel McKoley has signed a Memorandum of Understanding (MoU) with the Secretary General of the Africa Continental Free Trade Agreement (AfCFTA) Secretariat, H.E. Wamkele Mene, to signify the beginning of a partnership which will facilitate trade among African Countries.

The Agreement which was signed during the launch of the AfCFTA Guided Trade Initiative which was also the celebration of the 2nd anniversary of the AfCFTA Agreement on Friday, October 7, 2022 at the McDan Private Jet Terminal in Accra, will grant McDan Shipping the opportunity to load and transport goods across AfCFTA member countries.

In the light of this, the McDan Aviation has acquired cargo planes and sea trade vessels to support the AfCFTA.

The Minister for Trades and Industry, Hon. Allan Kyerementeng lauded the efforts of Dr. Daniel McKorley and indicated that the initiative that McDan has taken would go a long way to help the success of AfCFTA.

The Minister mentioned that the event signifies that AfCFTA is not only on paper but in action and averred that the launch of the initiative signifies that governments of Africa are giving way to the private sector to make it a reality in terms of implementation and institutions in Africa are up to the task.

Delivering his Speech, Secretary General of AfCFTA H.E. Wamkele Mene mentioned that in 15 years, AfCFTA would succeed in lifting many Africans out of poverty and hence, he encouraged Africans to support small businesses.

Most of the stakeholders thanked Dr McKorley for stepping up and thinking about a way to support AfCFTA. They emphasized on how AfCFTAhonoured and made a reality the vision of those who liberate Africa.

After the keynote from H. E. Mahamadou Issoufou, former President of Niger and AfCFTA champion, attendees visited the exhibition booth that had products for the first pilot of AfCFTA.

The event ended with a cocktail and networking at McDan Private Jet Terminal.