Workers in and around the Marwako restuarant at La in Accra have been evacuated from their stations by Ghana National Fire Service (GNFS) officers following fears of a possible gas leakage.

Residents and commuters said they could smell the leaked gas, prompting fears of a similar explosion as the October 7 disaster at Atomic Junction in Madina.

“Everybody has been asked to leave,” an eyewitness whose office is close to the Total filling station told Joy News Monday.

Attendants at the Total and Goil filling stations have left their post as Fire Service officers monitor the situation.

“We just noticed that people were running away from the Total and GOIL filling stations,” the eyewitness said.

“As you cross the road you can even smell the gas which is still very dangerous,” he said adding shops have closed up over the development.

A NADMO official explained, when some workers at Marwako fast food began to smell a whiff of the highly inflammable substance, they called in the Fire Service.

Joy News’ Ernest Manu reported that the restaurant has been closed down for further investigations. 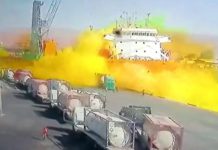