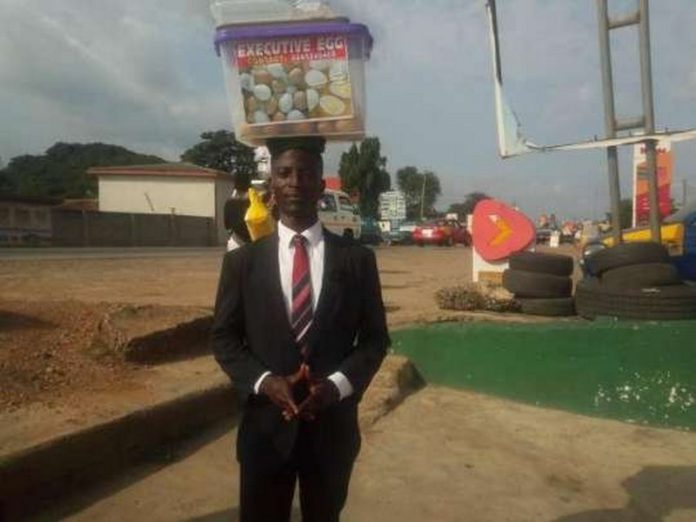 The deep, rich baritone “Barima K-o-s-u-aaaaa” resonating from the voice of a 36-year-old WASSCE holder, advertising the sales of his head load of hard-boiled eggs, would even wake up a ‘sleeping giant’.

Always dressed in a decent black suit with a tie to match, Nichols Anaba, who makes a daily sales of 8 crates of boiled eggs a day, is making enormous economic gains by monopolising the usually female-dominated preserve, through smart, innovative branding of the affordable super food.

Neatly packed in a white transparent plastic bowl with a fitting lid and the ‘barima kosua label, Anaba’s numerous clients, mostly traders along the Atimatim, Pakrono, Ahwiaa and Tafo vicinities in Kumasi, where he plies his trade, always wait for him in the mornings to get their daily portions to add to their breakfast.

The boiled eggs, with an accompaniment of hot spicy scotch bonnet pepper sauce, also goes as delicious snacks for some of his customers, both the elderly and young ones. “Even adults watching their diets buy my egg, because it is boiled and not fried with oil,” Anaba told the GNA.

Against the backdrop of rampant demonstrations from the teeming unemployed youth demanding white color jobs that befits their class, Anaba who looks like an aberration, tells the Ghana News Agency that he makes as much as between GH¢ 120.00 – GH¢ 180.00 profit a day amounting to a minimum of GH¢ 2,500. 00, a month.

He stands out to prove his other colleagues wrong and advises them to stop depending solely on the government for jobs instead of using their own initiatives to find jobs to do.

Anaba, after completing the SHS education in Ghana Senior High School (GHANASCO) in Tamale and with no help from his parents to continue his education, descended to the south to look for a job.

He was fortunate to be employed as a pupil teacher in one of the popular private schools in Kumasi. After a few years, by dint of hard work and humility, his proprietor promoted him to become the headteacher.

“However, I realised the going was still tough for me with the meager salary and after praying to God for a better paying job, I decided to go into bread-making and retailing”, he said.

I had to quit the bread business again because, it had become too competitive- so many people were into that business.

Necessity, it is said, is the mother of invention, this mantra motivated Anaba. “I wanted to initiate something unique on my own, which could later attract others too and truly that is working because I see many people showing interest in my brand.

He shared his dream of expanding the business to employ more people to do the selling like “Adinkra Pie”, is doing

Anaba narrated to the GNA how his former work mates still in the teaching field used to tease him with slurring phrases like ‘ from hero to Zero’ and the likes, just to discourage him from what he was doing to come back to teach.

“But I wasn’t deterred at all by that because I alone knew that what I earned from my current job was in multiplies of what was given me in teaching’ he added.