A 22-year-old man is reported dead after drowning in Pra River during a swimming competition.
The deceased, Kwame Porter is said to have gone to the river with some friends when the unfortunate incident occurred.
Some residents who witnessed the incident in an interview with Adom News’ Alfred Amoh said the young boys had challenged each other over who can outwit who in the river which had overflown its banks.
They therefore decided to give the winner of the swimming competition GH₵10.00.
An over confident Kwame Porter, an eyewitness said quickly jumped into the river and has since disappeared.
Friends who were in the river with the deceased described his death as strange saying Kwame is a very good swimmer and very cautious. 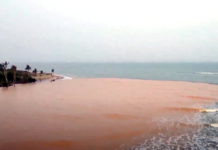