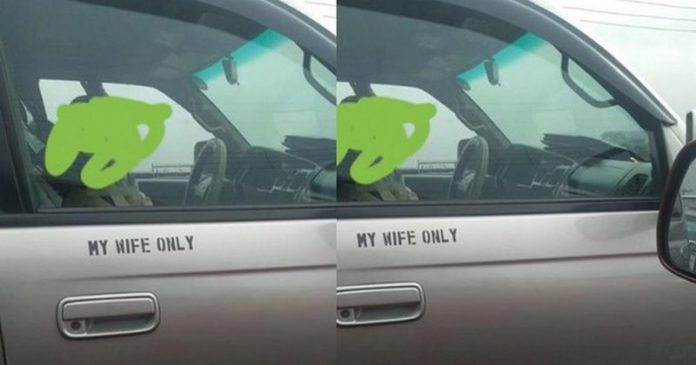 Interesting reactions have greeted the decision of a man to reserve the front seat of his car exclusively for his wife.

According to correcting.com, the owner of the car resides in Port Harcourt of Nigeria’s Rivers state.

A photo of the car with the man himself sitting inside emerged online and has thrown social media users into a frenzy of reactions.

The man has embossed My WIFE ONLY on the front passenger side of the car in block letters ostensibly for emphasis.

The photo has received mixed reactions with some people saying the man is romantic and principled, while others also speculate that his wife herself might have written the warning on the car to ward off ‘slay queens’.

Meanwhile, in another news, a man decided to put friendship aside for the time being and reported his close friend to authorities to investigate his alleged overnight wealth.

According to a Nigerian man reported by Correctng.com as a lawyer, he is currently representing the accused man in court.

He took to his Twitter page to disclose that the complainant suspected that his friend might be engaged in some illegal means of making money, hence he filed a complaint against him with the Economic and Financial Crimes Commission (EFCC).

“A client’s close friend wrote a complaint against him to the EFCC because he felt he became rich overnight,” the lawyer identified on Twitter as @Selzinng said.

He lamented how the complainant’s action amounts to a betrayal of the accused, saying the latter was of financial help to the former and his family but he chose to stab him in the back.

“The same friend he reported was always giving him money to take care of himself & his family.

“The guy was not just contented, we dey Federal High Court now sha,” the lawyer wrote on Twitter.

Although he expressed concern about the complainant’s so-called betrayal of his client, @Selzinng failed to mention what legal work he does to make money.