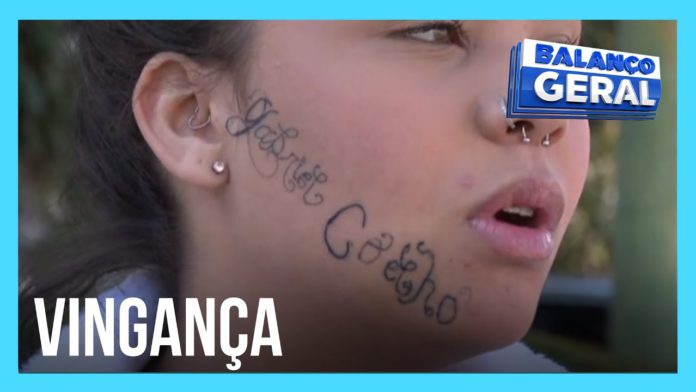 A Brazilian man has been accused of kidnapping his ex-girlfriend and tattooing his name on the side of her face, as revenge for breaking up with him.

Tayane Caldas, an 18-year-old woman from the Brazilian state of Sao Paulo, was on her way to school last Friday, when she was approached by her ex-boyfriend, Gabriel Coelho, who forced her to get into his car.

Afraid she would be attacked if she didn’t comply, the young woman got into the vehicle and was taken to her ex’s home in the municipality of Taubaté.

There, the 20-year-old Coelho tattooed his full name on the girl’s right side of the face, from her ear, down to her chin. Although he doesn’t deny doing the tattoo, Gabriel Coelho claims that Tayane was more than happy to let him do it.

The following day, Tayane’s mother filed a missing person’s report with the local police and managed to track her down to the Coelho residence.

She took her daughter home and encouraged her to press charges against the abusive ex-boyfriend, instead of simply covering up her new face tattoo and several bruises.

Gabriel Coelho was taken into custody on Saturday, despite his father backing up the claim that Tayane was happy to let him tattoo his whole name on her face.

Apart from his ex-girlfriend’s new accusations, he will also serve time for not complying with two restraining orders filed by Caldas, one in 2021 and another this year.

“I am afraid of him,” Caldas told TV Band Vale. “The law these days, everyone knows he doesn’t stay in (jail) for long, and with this whole situation, I’m afraid of him.”

After Tayane Caldas’ lawyer shared her horrific ordeal online, a number of Brazilian influencers and tattoo removal shops joined forces to help her.

The 18-year-old attended her first laser removal session last Wednesday, in an attempt to erase the tattoo from her face. She is allegedly trying to remove two other tattoos of Coelho’s name from her body.

The two started dating in 2019, and at first, everything was going well. About a year after the beginning of the relationship, Coelho, a tattoo artist, started having fits of jealousy and attacking the young woman, at which time her mother convinced her to leave him.

The two broke up for eight months and got back together after he promised he wouldn’t hit her anymore. He broke his promise, and this time Tayane’s asked for a restraining order.

The girl’s parents also tried sending her to Sao Paulo for a few months, but as soon as she return to Taubaté, her ex started threatening her again.