Spokesperson to former President John Mahama has mounted a spirited defense of his infamous “do or die” comment ahead of the 2024 general elections.

Felix Kwakye Ofosu says his boss’ comment is justified, especially when the National Democratic Congress (NDC) will be dealing with a government that believes in “the use of brute force to win elections”.

“‘Do or die’ is not a call to violence; the former President was only indicating that in 2024, we are going to maintain a state of preparedness and a high level of vigilance and that, we are not going to countenance any act of intimidation or rigging,” he said in an interview on Asempa FM’s Ekosii Sen programme Wednesday.

Former President Mahama has been condemned for his ‘do or die’ comment which many believe is a call to violence.

Mr Mahama has been asked to apologise for the comment but he has since explained that ‘do or die’ is an idiomatic expression hence he owes no one an apology.

In support, Felix Kwakye Ofosu said Mr Mahama’s ‘do or die’ has deliberately been misconstrued by the ruling New Patriotic Party (NPP) to equalise the infamous ‘All-die-be die’ comment made by President Akufo-Addo.

“The attempt to equalize to wipe away Akufo-Addo’s terrible record of violence will not work. Mahama has no such tendency for violence,” he stressed.

Mr Kwakye Ofosu could not fathom why people will make noise about Mr Mahama’s call on NDC members to be vigilant at the polling station.

“There is nothing in President Mahama’s life which connotes violence but the opposite can be said about President Akufo-Addo who even when in opposition, incited violence,” he stated.

He urged Ghanaians to rest assured that the NDC and John Mahama will not plunge Ghana into chaos for power. 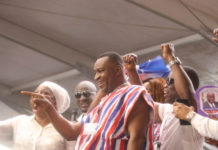