The President of the Republic of Ghana, Nana Addo Dankwa Akufo-Addo says the decision by the retired Chief Justice of the land, Her Lady Georgina Theodora Wood, to broadcast live the 2012 Election Petition case contributed immensely to his victory in the 2016 general elections.
According to the President, the decision uncovered most of the loopholes in the country’s electoral system and raised awareness about the need for greater vigilance amongst supporters and sympathizers of the New Patriotic Party (NPP) that resulted in the party’s victory in the 2016 Parliamentary and Presidential elections.
“Her [Retired Justice Georgina Theodora Wood] decision to broadcast proceedings of the celebrated election petition for which I was plaintiff together with the Vice President and our late lamented colleague, Jake Otanka Obetsebi Lamptey, was an important moment in our country’s political evolution. It exposed the vagaries of our electoral system and compelled greater vigilance on the part of activist of my party which undoubtedly helped us to achieve the famous victory in December 2016. So madam you can see my presence here as the President of the Republic is an unintended consequence of your decision and I have every reason to be grateful to you,” noted President Akufo-Addo.
President Akufo-Addo made this observation when he addressed a State dinner in honour of the retired Chief Justice, Georgina Theodora Wood at the State Banquet Hall in Accra on Friday.


Handling of the Judicial scandal
President Akufo-Addo was full of praise for the former Chief Justice for the way and manner in which she handled the bribery scandal that rocked the Judiciary when she was in office. The President described the exposé as her greatest crisis, however, she confronted it methodically and thereby regained and restored the confidence of Ghanaians in the third arm of government, the Judiciary.
Gratitude of the Nation
The President observed that, it is important that as a country, it recognized and acknowledge exceptional service to the Nation. Having served as the first female Chief Justice of the Republic and also as the longest serving Chief Justice, the country owes the Justice Rtd. Georgina wood a debt of gratitude for her service.
Response of Wood
In her response, former Chief Justice Wood celebrated former President J.A. Kufour for risking his confidence in her when he appointed her Chief Justice some ten years ago. She also celebrated former Presidents Evans Atta Mills and John Mahama for supporting her to remain in office when they served as President. To the President of the Republic, the former CJ thanked  him for successfully retiring her and appointing her to serve on the Council of State as the first former Chief Justice to be appointed to that office under the fourth Republican constitution of Ghana. 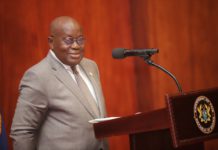