Adomonline.com
Home News Local News Local Govt Ministry inaugurates committee to fight galamsey in the Northern region
Facebook
WhatsApp
Twitter
Telegram
Email
Pinterest
Print
The Minister for Local Government and Rural Development, Hajia Alima Mahama
in conjunction with various ministries has inaugurated and sworn in the District Committees on illegal mining in the Northern part of the country.
The Committee will fight illegal mining, known in Ghana as galamsey in some of the districts in the Northern part of the country where water bodies have been heavily polluted.
The Local Government minister called on residents in the affected areas to support the committee to fight the menace.
READ ALSO: Teller, Cash Boy held after stealing 200K from Consolidated Bank
She asked people living in such districts to volunteer information on culprits engaging in illegal mining activities for prompt action.
Hajia Alima Mahama explained that 60 committees already set up in the southern part of the country have chalked some successes hence the need to replicate same in the north.
The Local Government Minister added that there is the need for local authorities to play an important role to support the committee to end the galamsey menace in their areas of jurisdiction.
READ ALSO: NDC to adopt “Jehovah’s Witnesses” concept for election 2020 – Ofosu Ampofo
Also, the Northern Regional Minister, Hon. Salifu Saeed described as timely the initiative by the Local Government Ministry.
He revealed that illegal mining is being done in 12 districts, it is very prevalent in the Bole-Bamboi, Sawla-Tuna Kalba and the Mampurugu Mogduri Districts.
Hon Saeed appealed to the government to place a ban on “Shangfaing” which is the machine used for galamsey.
He was convinced when the ban is put on this machine, the devastation of the activities of illegal mining will be reduced.
READ ALSO: NSS chase employees who failed to offer service to the nation [Audio]
The Northern Regional Minister pledged his commitment to ensuring that the committees formed will work with all stakeholders to end the menace to realise President Akufo-Addo’s dream to end illegal mining activities in the country.

Judiciary is concerned about impact of illegal mining – Chief Justice 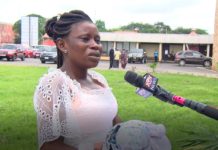 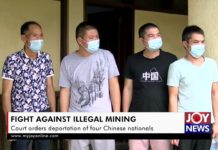 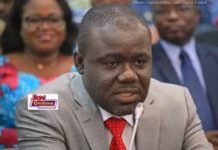