Veteran journalist Abdul Kweku Baako has defended the state’s flagrant disregard of a court order for a murder suspect to be granted bail.

Baako speaking on JoyNews’ Saturday morning show Newsfile, he insisted the police had cause to suspect the documents submitted to satisfy Gregory Afoko’s bail conditions was of doubtful validity.

He said the police was right for refuse him bail because there is mounting evidence of forgery and fake documents being used to secure bail for suspects.

Gregory Afoko accused of murdering NPP regional chairman in 2015 spent more than 120 days on remand despite a March 14, 2019 High Court order for his release.

The abuse of the suspect’s human right attracted widespread criticism from sections of the public, lawyers and groups including Amnesty International, OccupyGhana.

But arguing against the tide of condemnation, the Editor-In-Chief of the New Crusading Guide newspaper, Kweku Baako, said the police was trying to convince itself that Afoko had properly met his bail conditions set at ¢500,000 with two sureties, one of which must be justified.

ALSO: ‘41% of Ghanaians have mental problem’

According to court proceedings as read by Kweku Baako, the police wanted to see an original copy of a land tittle deed brought by a surety George Benson to process Gregory Afoko’s bail even though the court registrar had seen it and made photocopies of it.

The court registrar had also secured the authenticity of the document after the Lands Commission affirmed it to be the surety’s property.

But still, police kept the suspect.

Kweku Baako explained, the court registrar should not have taken charge of the processing of Afoko’s bail. This should have been left to the police, he said and referred to an authoritative book on criminal procedure and practice in Ghana.

He said that in the event that a suspect jumps bail, it will always be the duty of the police, and not the court registrar, to search and re-arrest the fugitive.

This is why the police must double check documents relating to meeting bail conditions even after the court registrar has expressed satisfaction that they are authentic.

According to Kweku Baako at least 10 cases have been struck out in court because suspects on bail and his surety had all gone into hiding.

These sureties submit fake or forged documents to secure the bail of suspects and eventually run away, he said.

It was “proper” that the Chief State Attorney and the Police were bent on doing further due diligence beyond what the court registrar had done, he went on.

The refusal of the surety to submit the original of his land title to the police feeds into the possibility of Gregory Afoko being the next suspect to jump bail, Baako suggested. 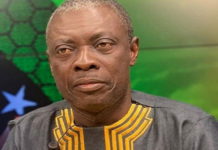 Osofo Kyiri Abosom has a message from God to Ghanaians