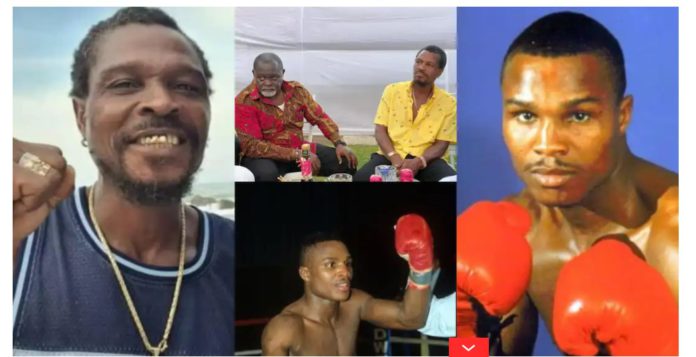 What was supposed to be a lovely meet-up of two boxing legends has rather brought up questions about Ike’s life.

A photo-making round online has Ike Quartey and Azumah Nelson sitting behind a table with glasses and champagne bottles.

Azumah Nelson was dressed in a fine African print shirt while Quartey wore a yellow-colored shirt.

From the photo, Quartey looked visibly older than Azumah even though the latter is eleven years older.

After the first photo of Quartey and Azumah popped up, another one of him looking frail and shabby followed.

Ike Quartey, born Isufu Quartey and nicknamed Bazooka, is one of the few Ghanaian boxers to have won a world title.

He started his career in 1988, just one day before his 19th birthday, and went on to become the WBA Welterweight champion in 1994.

He knocked out Crisanto España of Venezuela in the 11th round.

After holding the title for over four years, defending it seven times, he was stripped of the belt in February 1999 after his previous defence ended with José Luis López in a draw.

On February 13, 1999, Ike Quartey, undefeated in 34 bouts at the time, met Oscar De La Hoya, also undefeated in 28 bouts, in what is the pinnacle of the latter’s career.

Even though he lost by a split decision, he was applauded for giving the highly fancied American a run for his money.

Looking at the profile of Quartey and the money he has handled in his lifetime, it is not surprising that a photo of him looking wretched will get people talking.

But contrary to the talk that the Bazooka man is in financial difficulties, ETV sports presenter, Lukman Mumuni says the boxing legend is not poor.

According to Lukman Mumuni, he knows for a fact that Quartey owns many properties across Accra thus cannot be poor.

For him, Quartey may not be taking care of himself as he should, but he is more than okay.

“Ike Quartey is not poor. He is very well to do because I know his son and the cars he drives, which are all for his father. Maybe Ike is not taking good care of himself but he is very okay financially,” Lukman said.