“Kurt Okraku called me and confided in me that he is going to contest for the football association presidency so the Normalization Committee needs to work fast so we know the way forward”, he said.

The young administrator further explained the Normalization Committee is dragging its feet and hampering a lot of progress with the game in the country.

For Charles Ntim, the Committee must work a little faster so that individuals who are eyeing positions in the Association can come out confidently

“The Committee must provide us with a plan so that the aspirants can start campaigning so we know them and then the way forward but football is ongoing we only need a road map”, he added.

Kurt Okraku was a member of the dissolved Executive Committee of the Ghana Football Association, president of the MTN FA Cup committee and chairman of the Black Stars B. 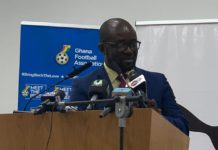