The Kumasi Traditional Council has teamed up with the Kumasi Metropolitan Assembly to relocate traders occupying pavements and unauthorized areas in Kumasi.

The move is in line with an eviction notice served by the Ashanti Regional Coordinating Council, calling for vacation of such areas by Monday.

The movement of traders some parts of Adum, Kejetia, Pampaso and the Kumasi Zoo area is expected to start on Monday.

They are to be assigned new spaces at the Race course and Abinkyi markets.

Some traders have been pleading for an extension of time, insisting transport unions are made to join them at the newly designated areas. 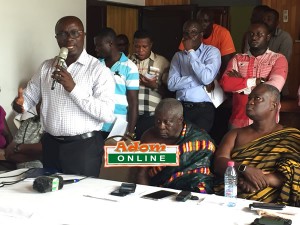 But in a closed door meeting with city authorities and the Kumasi Traditional Council, authorities say the traders have agreed to move peacefully.

The relocation  has  been endorsed  by the Manhyia Palace.

“We want to ensure that the routes we use from Pampaso to Manhyia is free for our procession,” he said.

Chief Executive of the KMA,Osei Assibey-Antwi says the Race Course and Abinkyi markets are ready to receive the traders.

He reveals the evacuation will also pave way for the completion of the first phase of the Kejetia market project.

“We have received several letters from the contractors of the market , they are six months behind time. So this is very timely,” he added.

Transport operators present at the meeting pledged their support for the exercise on Monday.