The KGL Group has offered its congratulations to His Royal Majesty, Otumfuo Osei Tutu II, King of Asanteman, for his dedication to Peace and Prosperity in Asanteman and Ghana as a whole.

The Group, in a statement signed by its Chairman, Alex Dadey, and copied to the media on Tuesday, said: “In over two decades and counting of his reign as the Sixteenth Asantehene, Otumfuo has chalked many accomplishments and good deeds for Asanteman and Ghana as a whole.”

The statement said, His Majest Osei Tutu II’s exploits have made his reign truly transformational.

“Prominently, Otumfuo has done this country a great service by constantly organizing a rapprochement and advocacy for peaceful elections among all the political parties in Ghana prior to elections every four years,” the statement added.

It said he tops this off by always engaging the leaders of the two major political parties, before, during and after elections, in the facilitation and mediation of often difficult political transitions.

The statement said such a transition and the required mastery of wise leadership to ensure the peaceful acceptance of election results were especially pronounced in the aftermath of the vote in the presidential elections of 2016.

It said also featuring highly in Otumfuo’s exploits towards ensuring peaceful coexistence in our country is his masterful leadership of the Eminent Chiefs’ Committee that achieved ultimate peace for the Dagbon people of the Northern Region after decades of an otherwise intractable chieftaincy dispute.

The statement said it was also of significance to mention how His Royal Majesty astutely resolved the crisis that occurred in October 2018 between students and University Authorities at the Kwame Nkrumah University of Science and Technology which had led to the destruction of both public and private property worth millions of Ghana cedis.

It noted that it was very much in order to let the living witness society’s acknowledgement of their good deeds so as to spur them on to more and greater accomplishments and this the KGL Group, led by its Executive Chairman, Mr Dadey wish to celebrate the Otumfuo for his many outstanding achievements for the People of Asanteman and the Ghanaian people. 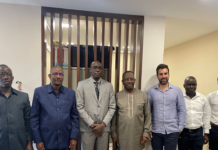