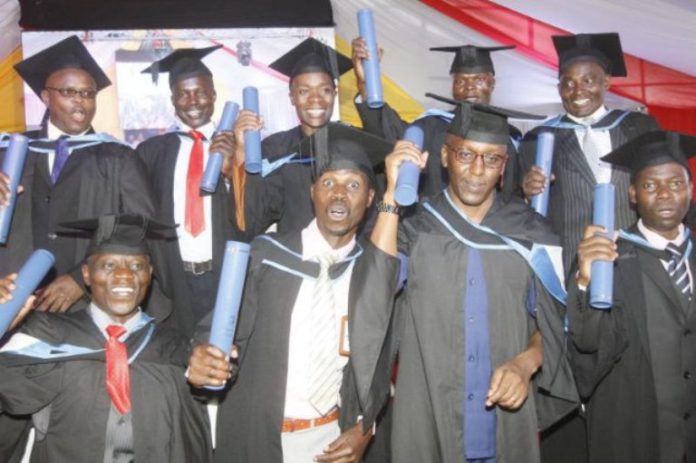 Four years ago, on a day that has remained the darkest in Herine Akinyi’s life, her son Hezron Onyango was sentenced to life behind bars.

As 26-year old Onyango was led away at Ngon’g Law Courts, Akinyi thought it was the last time she was seeing her son alive.

“To me that court session was like a funeral. It was like I was burying my son because a life behind bars meant he would never be with us again,” she says.

Onyango had scored B+ in KCSE exam after several years of interrupted schooling for lack of school fees and was waiting to join university when he was arrested and charged with robbery with violence.

But last Thursday presented new hope for mother and son who met during a graduation ceremony at Kamiti Maximum Prison. Some 10 inmates from various prisons across the country were awarded law degrees at the ceremony that attracted inmates and prison officers from Kenya and Uganda.

It was easy for Akinyi to spot her son who, wearing a red T-shirt with a clean shaved head stood out from the rest of the inmates who wore plain blue and black and white stripped uniforms to the graduation. The two exchanged wide smiles and Akinyi kept waving her hands even as Onyango tried to feign calmness to avoid attention of prison guards who closely monitored the inmates.

Akinyi was there for her nephew William Okumu’s graduation, and she learnt that her son too had enrolled for the degree programme.

Happy moment
“I am here for my sister’s son who was serving a life sentence but was released a few days ago. He is getting a degree in law. It is a happy moment for all of us at home because it means a new chapter in Okumu’s life,” she said.

“I have also learnt that my son enrolled for the degree programme. I thank God because he will now complete a degree that he couldn’t enroll for outside there.”

It was a quiet ceremony that was attended by officials from the prisons departments from Kenya and Uganda as well as representatives from the German Embassy, Britain and top management from the University of London where the degree is offered.

Nearby, 20-year-old Mary Njoki fixed her gaze on her father who had spent 19 years at Kamiti where he had eventually enrolled for the law degree. Njoki was barely a year old when her father, Joseph Karanja, went to prison.

“I am glad that my father is graduating at his age. But we’ll be happier when he gets out of prison to join us soon,” says Njoki. The first time Njoki knew she had a father was in April 2015.

“I grew up thinking I didn’t have a father because my mother never mentioned him. But four years ago, I found out that he was in prison and I visited him. It was the happiest day of my life,” she said.

Karanja, who was condemned to die many years ago for robbery with violence before his sentence was commuted to life behind bars, expressed optimism that he will be leaving prison soon, thanks to his law degree.

“I had lost hope that I would ever leave prison until I started studying law. I had exhausted all my pleas and was resigned to my fate behind bars for life. But I have gained legal knowledge that made me look at my charges afresh. I have already launched a petition in court for my case and I have prepared enough to ensure my acquittal,” he said.

The African Prisons Project started in Uganda 10 years ago to equip prisoners with legal skills and ensure they get timely justice.

Legal Aid Manager John Muthuri said Kenyan prisons are filled with inmates who do not deserve to be there.

“In Kenya, there are only about 8,000 lawyers who are supposed to serve more than 54,000 prisoners. This translates to about 80 per cent of inmates who suffer behind bars for lack of legal representation,” said Muthuri.

To enroll for the degree programme, one must have scored at least a C+ in KCSE and a similar grade in English and Kiswahili.

One must also first complete a three-week training as a paralegal officer to offer legal advice to fellow inmates. In Kenya, APP works with the Kenya Prisons Service to identify suitable candidates for training.